Matchidi Toscana, one of four cherry farms in the ZZ2 portfolio

During October, in the month before Chilean cherries start, South African producer ZZ2 seizes the gap and sends cherries to UK retail in 5kg boxes for repacking, to Dubai (taking more every year) and to the domestic market.

Demand is strong at the moment for the fruit which is all flown out; ZZ2’s cherry season starts at the end of September and can run up to the end of November. 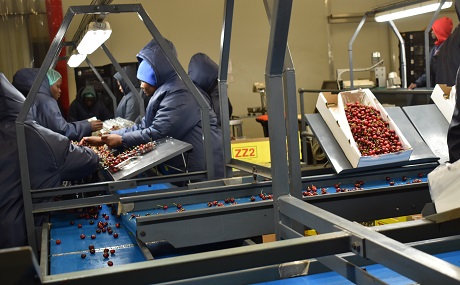 Due to the size profile on the low and mid cold requirement cherries (they peak on 20 to 24mm in diameter whereas Europe likes it 26mm and larger) as well as the effect of air freight on price points, the fruit doesn’t go to Europe.

Currently prices are stable and high, expected to move downwards when the Western Cape’s cherries join at the beginning of November, plus of course those of Chile.

Cherries (and herbs) near Unesco world heritage site
FreshPlaza paid a visit to one of their four cherry farms in the north of the country, Matchidi Toscana, spitting distance from the Cradle of Humankind and Lanseria Airport, northwest of Johannesburg. Due to development restrictions around the Cradle of Humankind, a Unesco site, it’s not unusual to see raptors flying overhead, with the skyscrapers of Sandton and central Johannesburg in view on a clear day.

On the rest of the farm ZZ2’s partners Marco Rugani and his sister Lisa Matthews are still cultivating artichokes, kale and other unusual vegetables and herbs on the farm where they grew up.

Overhead sprinklers to being winter daytime temp down
The oldest cherry orchards were established here in 2015 on what used to vegetable and herb fields, supplemented with more trees every year since. 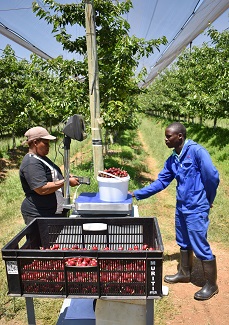 The harvest has very recently commenced, size helped by the youth of the trees at still sub-optimal yield, but production manager James Coldrey is excited about the impact the newly installed overhead sprinklers has had on flower break and fruit set this year.

Temperature management is a cardinal factor in their cultivation practices. The other is to form young trees into a tall spindle shape, while still bearing well at the bottom.

Their manipulation to promote productive branch development goes down to the level of individual buds on a tree, a handful of which receive hormone treatment with gibberellic acid to promote rapid stem growth. 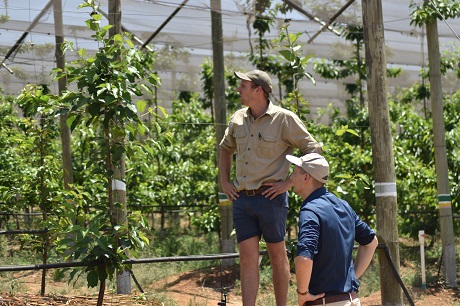 Highly labour- and time-intensive cultivation
The natural shape of the cherry tree is a lot like the trees in children’s drawings, James notes, rounded and stretching upwards – all impulses that commercial cultivation aims to thwart.

Young branches are initially held down horizontally by a toothpick inserted to create a right angle (a callus forms around the insertion in a couple of days), replaced by a kebab stick when the branch grows stronger. Mature branches are kept straight out at their sides by a myriad of lines fixed to an anchor going close to 30cm into the soil. 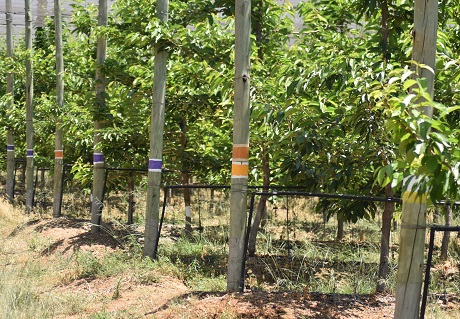 It’s still a small team, doing everything from growing to picking. Cherry harvesting is made more complex by the play of light and shade on the eye’s perception of the fruit colour; there is a very significant price benefit to cherries with deep coloured skin and flesh.

For that reason an orchard is harvested multiple times.

At the moment this farm is obtaining an approximately 70% export packout on colour and size. 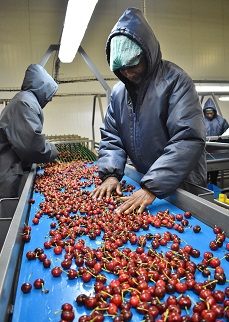 From the orchards the cherries go to the cherry packhouse on the same farm, where fruit is hydrocooled at 4°C and packed in a wide variety of different packaging formats for its clients overseas and locally, to be flown out shortly afterwards.

The company’s extensive tomato network – ZZ2 trucks from Limpopo and Gauteng leave with tomatoes for KwaZulu-Natal and the Western Cape every day (on a single day last week 47 trucks were needed for the strong tomato crop from Mooketsi) – facilitates the distribution of the much smaller cherry volumes domestically in a way that would be more difficult to emulate for a fruit producer in the Western Cape. 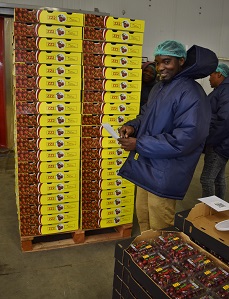 It’s a hardworking (and handsome) place: the ZZFresh tomato staging depot is situated alongside the cherry packhouse.

Their tomatoes are a sine qua non in close to every single fresh produce outlet in South Africa, from high-end retail to street sales, and it’s all packed here, along with their peaches and nectarines from neighbouring Muriti farm near Rustenburg, onions from the Western Cape and dates from Namibia.

Right: McWillie Kaunda with the 5kg cartons and punnets in which the cherries are flown to the UK