The worldwide production of avocados is around 4.2 millions of tons per year and Colombia is the fourth largest avocado producer in the world, producing roughly 5% of the global avocado production and it holds an excellent exportation potential.

However, sales are limited in some markets due to deficient practices for the control of diseases in the primary production and low post-harvest quality standards. At least 20–40% of annual losses of avocado crops are caused by pathogenic fungi and the chemical treatments are inefficient, cause environmental pollution and are increasingly restricted by international laws.

Scientists at the Institution University Colegio Mayor de Antioquia (Medellin, Colombia) have evaluated the biocontrol capacity of a bacterial extract to protect avocado fruits and plants from pathogen infections. 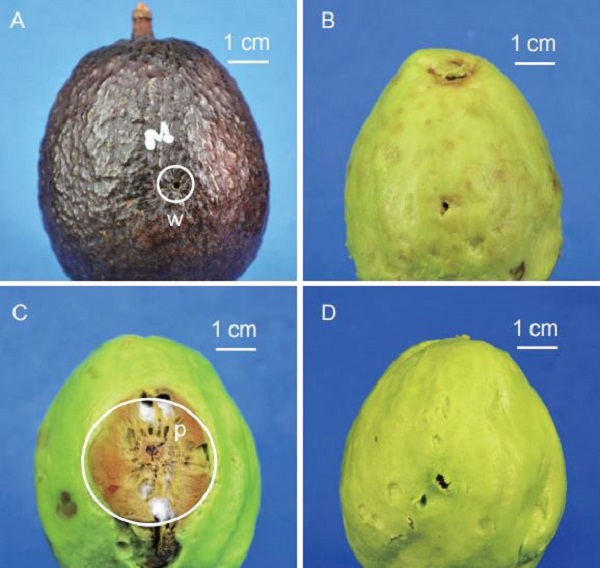 For the work, the extracts from the bacterial isolate Serratia sp. ARP5.1 were obtained from liquid fermentations in a bioreactor. A body rot postharvest infection model with Colletotrichum gloeosporioides on fruits was developed. Packaging conditions were simulated using the bacterial extract and the commercial fungicide prochloraz as a positive control. Seedlings infections with Phytophthora cinnamomi were performed on two types of avocado (West Indian race and cv. Hass). The Area Under Disease Progress Curve (AUDPC) was calculated using the bacterial extract and a commercial product with fosetyl-aluminium as treatments.

"The bacterial extract significantly reduced infections by C. gloeosporioides on injured avocado fruits at 31.1 µg/mL. At the same concentration, also the intact fruits were protected against body rot infections and no significant differences were found with the commercial fungicide - the scientists explained. On the other hand, AUDPC in the seedlings was significantly reduced with the extract treatment at 3 µg/mL compared to the control. However, a possible phytotoxicity effect of the extract resulted in the seedlings and confirmed by pathogen recovery and tests on Raphanus sativus seedlings. Finally, formulations of the extracts (emulsion and emulsifiable concentrate) were prepared, and bioactive stability was assessed for 8 weeks. The emulsion formulates demonstrated very stable bioactivity against P. cinnamomi".

The results have confirmed that the bacterial extract and the emulsion formulate are promising for the control of avocado Hass pathogens. New bioproducts based on this type of active principles could be developed for the benefit of the avocado industry.