Kuehne+Nagel results for first 9 months of 2019

"Tense market environment led to a decline in airfreight volumes"

In the first nine months of 2019, Kuehne + Nagel significantly improved its results. Seafreight and Overland continued their momentum in the third quarter. The tense market environment led to a decline in airfreight volumes. The restructuring in Contract Logistics showed first results. 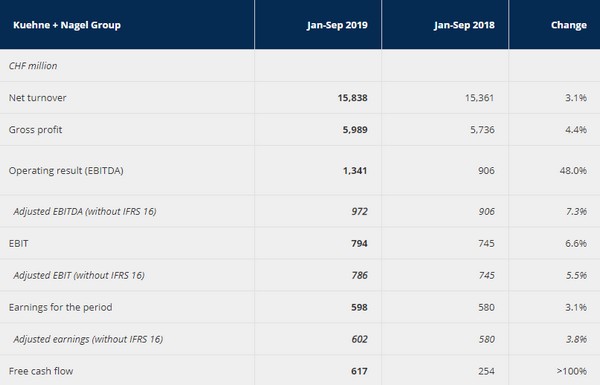 Seafreight
With an increase of 7.3% year-on-year to CHF 5.6 billion, Seafreight posted a very solid net turnover growth and once again improved its performance in the third quarter. Kuehne + Nagel grew significantly in a stagnating overall market and, with 3.67 million standard containers (TEU), the Group transported 152,000 units more than in the same period of last year (+4.3%). Main success drivers were the selective growth strategy, effective cost management and outstanding service quality. EBIT rose by 10.2% year-on-year to CHF 357 million. The business unit improved its conversion rate (ratio of EBIT to gross profit) to 30.4%, maintaining its position at the top of the industry.

Airfreight
The airfreight market continued to decline in an environment of global economic uncertainty and rising trade barriers. As a result of the sharp drop in demand in some key industries, Kuehne + Nagel's Airfreight volume fell by 6.4% year-on-year to 1.22 million tons. Still the business unit was able to significantly increase gross profit, especially in the areas of pharma & healthcare, perishables and time-critical shipments. The integration of Quick International Courier, Inc. is proceeding according to plan. Quick, one of the market leaders for time-critical transport and logistics services for the pharma and aviation industries, generated sustained positive results in the third quarter. The 3.0% year-on-year decline of EBIT to CHF 263 million was resilient in light of persistently challenging market conditions.

Overland
Net turnover in Overland rose by 2.0% year-on-year to CHF 2.7 billion and gross profit by 4.1% to CHF 846 million. Despite the slowdown in global trade, the business unit again grew well ahead of the market. EBIT increased by 8.8% year-on-year to CHF 62 million.

Contract logistics
In the third quarter, the ongoing restructuring of Contract Logistics yielded results. Related one-off profits from real estate sales amounting to CHF 23 million (previous year: CHF 11 million) were included in EBIT. Due to portfolio optimization measures and a focus on higher-margin business, net turnover increased by 3.5% year-on-year to CHF 4.0 billion and gross profit by 2.1% to CHF 3.0 billion. Growth was thus significantly slower than in the previous year’s period.