Automation inside and outside Mucci’s cucumber greenhouse

When talking about Mucci’s novelties, a lot of attention goes to the strawberries. Not a surprise, since the company has been one of the pioneers in this greenhouse crop. However, there’s more nice things going on in their Leamington enterprise. A high level of automation is in place at their cucumber farm – both post- and pre-harvest.

With a total production area of over 250 acres and a partner network of 1500 acres, Mucci Farms is one of the largest greenhouse operators of North America. This year the company made headlines for acquiring Orangeline Farms and announcing further expansion of their greenhouse acreage both in the US and in Canada. 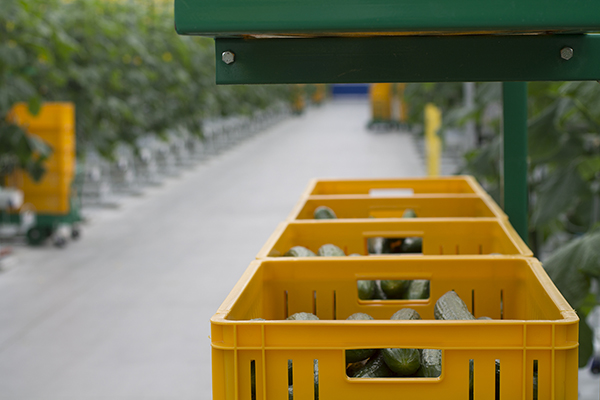 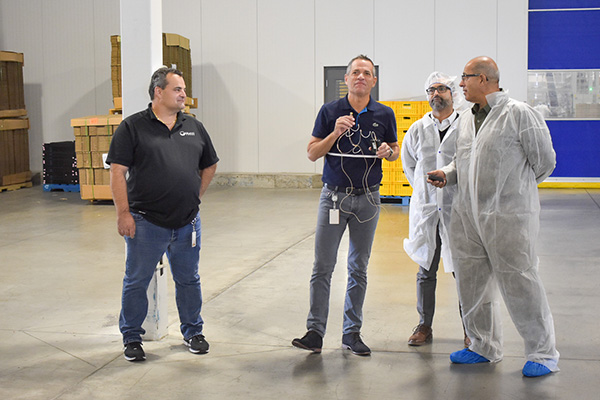 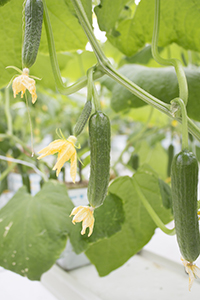 Back in 2015, their greenhouse acreage was expanded with two 14-acre greenhouses all suited for high-wire cucumber cultivation, and last week head grower Guy Totaro told the participants of the Canadian Greenhouse Conference Bus Tour all about this facility.

“We’ve been doing a lot of testing on the long cucumbers to find the best variety for the best period of time. That includes production numbers, labour and virus resistance. With our varieties we can grow quality produce year round", Guy explained. The Mucci cucumber assortment is completed with mini cucumbers and some specialties, also being grown on a total acreage of 14 acres. That is to say, normally. During the visit, the mini cucumbers had just been pulled out for the crop change.

Lighted cultivation
The long cucumber cultivation cycle started with planting on September 9 and harvest took off in week 35. At the greenhouse, 3 cycles take place per year: January till May, May till September and September until Christmas, with the big cleanout taking place between Christmas and New Year’s Eve. “The mini cucumbers crop is lighted already and we’re hoping to add the fixtures here next autumn as well, so we can increase the production in winter,” Guy shares. “Productivity could go up from 200 to 300 pieces. To make us happy, at least.” The choice has fallen on HPS lamps - as Guy believes a little more research is needed to make LEDs a success in cucumbers. 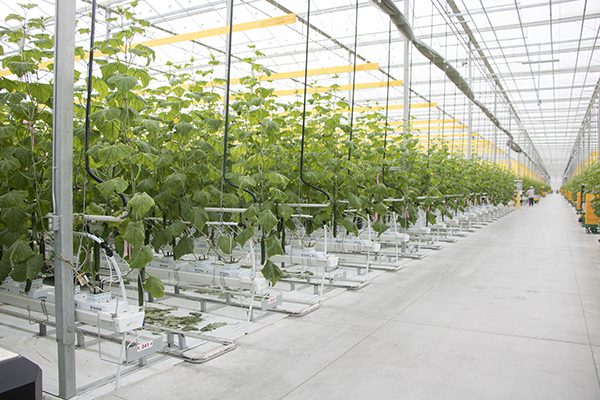 Packing area
When visiting Mucci’s farm it easily becomes clear a high level of automation has been realised in the packing area. A massive Viscon line is realised in the area, taking care of sorting, grading, packing and palletising of the cucumbers. “Thanks to the RFID tags the system knows what products they are, where they come from and what they need to be sorted and packed into.”

The line includes robot arms for the mini cucumbers, making it possible to fit them on a tray perfectly or pack a precise weight of mini cukes in a certain packing, and therefore playing an important role in the ‘one touch’ approach Viscon had when realising this line: handling the cucumbers just once instead of multiple times. “Before, we had 40 people working on packing the mini cucumbers. That number is now down to 10”, says Guy. Most people in the packaging area are there to check and double check the machines’ work. “The unit does 90% of it.” 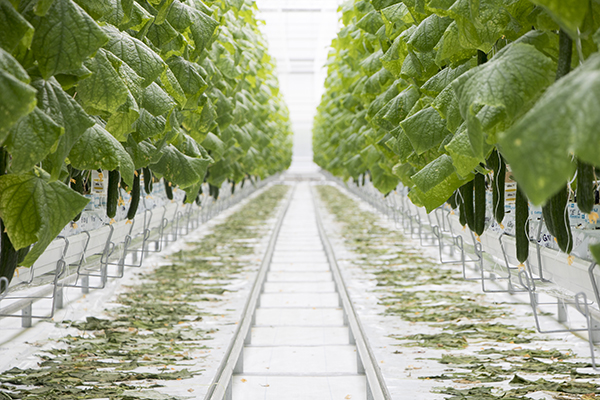 Automation pre-harvest
Before the cucumbers end up in the packing area, they’ve undergone a fair level of automation already. Within the greenhouse, it’s not just the water recycling (completely recycled thanks to the Priva system), or the M-Track harvesting trolley system that puts Mucci in a forerunner position when it comes to automating the greenhouse. A less visible feature in the greenhouse is that the growers are a trial farm for the e-Gro system by Grodan, that was launched in April of this year.

E-Gro is a software platform for data-driven Precision Growing, giving growers smarter insights into the greenhouse, allowing them to fully optimise cultivation. “Combined with the GroSens system, giving real-time insight into the WC, EC and temperature of the stone wool substrate, we can share the insights in a dashboard. Then, thanks to the AI incorporated in the system, e-Gro should be learning to grow itself and finally support us”, Guy explains. They use the data on water and light and climate and growth and take that into account to make a crop decision.

“We’ll both be doing this work for now, the machine and the human. We’ll find out where they overlap and based on that both we and the computer will learn. We’re expecting that the additional knowledge will help us in the crop to make more fact-based decisions”, he concludes - and laughs: “However, my father always said that a computer was just as good as its user.”