The best chance for Australian bananas to develop a strong export market is to focus on niche opportunities, according to trade analysis company, Fresh Intelligence Consulting.

In addressing global trends, Principal and Senior Analyst, Wayne Prowse told Australian banana growers the significance of putting a plan together that focuses on North Asia, particularly gaining access to the Chinese market.

"Australia is a small player in the global industry - I'm not the first to say that," Mr Prowse said. "Our domestic market will definitely drive demand for Australian bananas, so our domestic market is highly important. We don't have the scale to develop Asian markets; due to the distance and the competition from Central America in particular, and even Western Africa. Market access will also restrict some countries, such as China. But if we are looking to exports, North Asia is where we have to look, countries such as Japan, Korea and China. That's the area that we need to be working on, with a plan as to how we can work with our big horticulture exporters in the citrus and grape industries. Don't do it on your own, but with others that know the market. If there is a plan that can be put into place to get access to China, it would be a good opportunity in niche areas, so we are not taking on huge area of the country, because it's a huge scale to be up against." 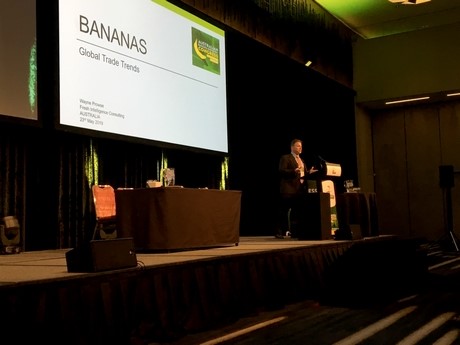 Mr Prowse added that last year, 94 tonnes of Australian bananas were exported, with a value of $205,000, mainly to Pacific countries and New Zealand. Overall, across all fresh produce commodities, Australia's exports of fruit have reached $1.17billion, with a volume of 450,000 tonnes, which is on a upward growth trend over past few years, despite droughts, and value of the Australian dollar.

"Citrus and grapes make up most of it, but there's also melons, summer fruit and cherries," he said. "They are producing a lot to meet the demand of the northern hemisphere. When you hear about Australia increasing exports of horticulture, a lot is driven by the temperate fruit demands and counter-seasonal production. What has helped us has been the Japan Free Trade Agreement (FTA), and the China FTA, and the Korean FTA. It has seen tariffs drop from high levels down to almost zero." 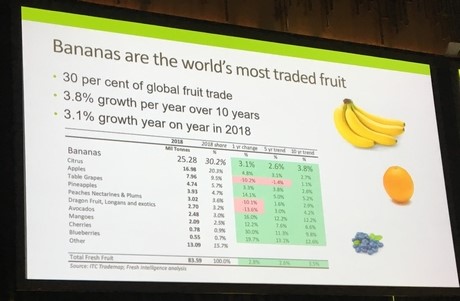 Globally, there are 135 countries that produce bananas, according to Mr Prowse, but it is only a few countries that make up the international trade. The main ones; Ecuador, Guatemala, Costa Rica, Colombia and the Philippines make up 80 per cent of exports.

"Those big players represent the big movers and shakers of the banana industry globally," Mr Prowse said. "When you look at India, 30 million tonnes are produced with basically no exports, and no imports. Like Australia, they produce a huge quota of bananas for their 1.3 billion consumers around the country. China produce 11 million tonnes of bananas, but are importing 1 million tonnes. The big five exporters are trading a fair proportion of what they grow in their country, for example almost all bananas from Ecuador are exported. Then markets like Europe, United States, Russia and Japan all have no production, and have to import it all. This is now a closed system, because globally all the exports have to become imports somewhere else."

Domestically, Mr Prowse also made the point that if Far North Queensland was a separate country, 400,000 tonnes were supplied into Southern Australia. 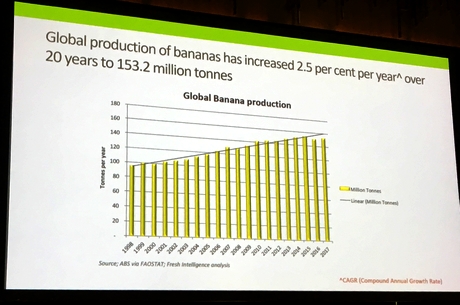 He went onto explain that it is the most traded fruit globally, with 153 million tonnes of bananas and plantains traded (121 million of banana varieties).

"Total banana and plantain production has reached a steady growth of 2.5 per cent, per year over the past 20 years, to reach these volumes" Mr Prowse said. "Asia is the biggest producer, followed by Africa, followed by Latin America. 20 per cent of the world's bananas are produced in India, making them the largest producer. 30 per cent of the world's fruit that is traded is bananas. There has been a steady 3.8 per cent growth over the past 10 years."