Some 115,000 tons of fresh blueberries are expected to be exported by Chile this 2019/20 season. According to an article on iqonsulting.com, the changes come from the new orchards planted, with more than 4.000 hectares in the last 4 years. With new varieties and-or those that have presented good post-harvest results. One part of these new plantations correspond to the old-variety renewal and another part corresponds to additional planted area. On august 23rd the updated results of the national planted area census were released, which this time covered the regions from Maule (seventh) to the extreme south.

The figures showed a total planted area of 18.374 hectares (45.403 acres), 2.500 hectares (6.177 acres) more than the previous census of three years ago. This new area, which also includes the orchards renewal, presents new varieties and new technology which will help to improve the quality of the Chilean supply. 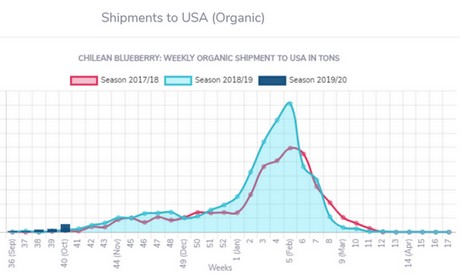 Another factor which will affect the Chilean blueberry production is the draught on the North Zone (fourth and fifth regions), which extends in a lower degree down to the sixth region. However, the blueberry production in the most affect production areas has already been cut, while the current production presents enough water reservoirs and more efficient irrigation handling, pointed towards fruit quality.

Finally, while checking the meteorological factors of the current season, besides the water scarcity, we noticed less winter chill-hours, which activated the plants 2 weeks before average approximately. Firstly, it suggested an early season. However, the advance of the high temperatures has been slow and currently the season will move in a regular timing, with a slightly early timing only in the North Zone. Thus, the exported volume in the current season, is greater than the previous.

Until now, 373 tons of fresh blueberries has been exported from Chile. 108% more than the previous season, out of which 62% corresponds to organic supply from the Metropolitan and sixth regions. The fourth region adds the remaining conventional volume. North America has received 73% of the total exports up to week 40, while Asia 27%. Europe presents minimum volumes so far. A new season has started, with many changes as expected in a mature business facing different challenges. From new competitors to readapt to a market that is demanding attractive fruit with better taste and firmness.