The Eastern Broccoli Project began in 2010 with the goal of growing a $100 million broccoli industry in the Eastern U.S. in 10 years. Currently, the industry is valued at around $90 million and, with two remaining years of funding, Cornell researchers say they are on schedule to meet their goal.

“I think we’re going to hit it,” said Thomas Björkman, Cornell professor of horticulture and the project’s principal investigator.

Between 2012 and 2017, the number of New York state broccoli farms increased from 290 to 535, and the number of Eastern Seaboard broccoli farms doubled. Yet about 85% of the broccoli consumed annually on the East Coast is shipped from California and Mexico, even with widespread enthusiasm for locally grown foods.

One challenge of growing broccoli in the East is that the plant was originally cultivated as a winter vegetable in Mediterranean climates, so trying to grow it in the Eastern U.S. summer – when summer nights exceed 65 degrees Fahrenheit – ends up confusing the plant’s developmental cues.

At such temperatures, the flower buds and heads often grow unevenly, and while perfectly edible, do not look the same as West Coast broccoli. “It’s not at all marketable; you would never see it in a store,” Björkman said.

The first paper, a marketing study, “Produce Buyer Quality Requirements to Form an Eastern Broccoli Industry,” was published in the Journal of Food Distribution Research in March. 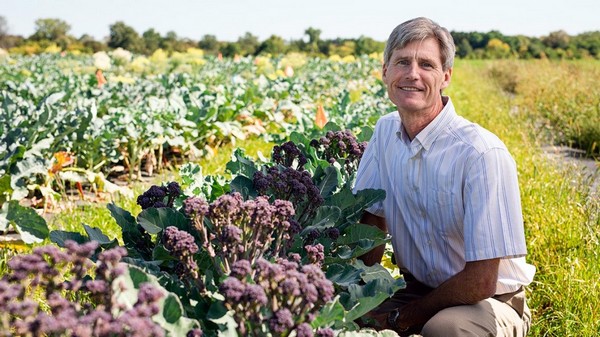 In the study, the authors – including Philip Coles (MS ’15), professor of practice in the College of Business and Economics at Lehigh University; Miguel Gómez, associate professor at Cornell’s Charles H. Dyson School of Applied Economics and Management; and Björkman – surveyed a group of influential wholesale buyers (those who buy on behalf of supermarkets and are the gatekeepers of quality standards, as opposed to consumers) to gauge whether a growing appetite for local foods might outweigh the fact that Eastern broccoli looks a little different from Western broccoli, which is the industry standard. Though Eastern-adapted varieties are still of high quality, they can have a lighter color or larger flower buds than West Coast varieties.

At the same time, sales of local foods increased from $5 billion to $12 billion between 2008 and 2014, according to Packaged Facts, a food industry research firm.

The survey revealed that in spite of a desire to source local foods, Eastern varieties needed to look similar to the Western standard to be marketable.

The researchers recommended local growers who raise Eastern varieties start by reaching out to natural food stores, which tend to be smaller and more forgiving of varied appearance.

The second study, “Complex Horticultural Quality Traits in Broccoli Are Illuminated by Evaluation of the Immortal BolTBDH Mapping Population,” published Sept. 18 in the journal Frontiers in Plant Science, identifies some of the genetics behind these horticultural quality traits in order to help breeders produce Eastern broccoli that appears more like Western varieties, among other adaptations. Authors included Björkman, Mark Farnham, a USDA Agricultural Research Service plant geneticist at the U.S. Vegetable Laboratory in Charleston, South Carolina, and Zachary Stansell, a graduate student in Bjorkman’s lab.

They evaluated 25 traits in six trait classes (architecture; biomass; timing of seasonal development, called phenology; the structures of leaves, and flowers; and head quality) and determined specific markers that, when present, are more likely to produce a uniform plant.

“We basically have markers for a lot of these traits, and that will really move breeding along,” Björkman said. Currently, breeders who are involved in the project are beginning to work with these markers.
“You can identify now if a parent has the genetic makeup for a trait,” Björkman said, “then if you cross it [with another compatible parent], you’re more likely to get [the offspring] you want.”

Several hybrids of broccoli have been commercialized recently, and more from both public and private breeders are nearing release by seed companies. Over the next two years, project scientists will work with these companies and farmers to ensure a steady flow of seeds and broccoli through the pipeline on the way to hitting the goal of creating a $100 million industry.

The USDA-funded project includes seven other universities and 11 companies.