AU: Onions recorded the largest growth in export value in 2018/2019

Australian vegetable exports have nearly doubled in since 2011/12 after a seventh consecutive year of growth in 2018/19. Growth in the value of exports was assisted by a recovery in the average export price of vegetables after a decline in 2017/18, however it was a rise in export volume, resulting from increased production, that had the largest impact on the growth in value.

Carrots remained the largest export product for vegetables at $96.6 million. The value of carrot exports increased by a modest 2.1 per cent in 2018/19 as export volume increased by only 1.9 per cent and the average export price remained relatively stable at $876/tonne. 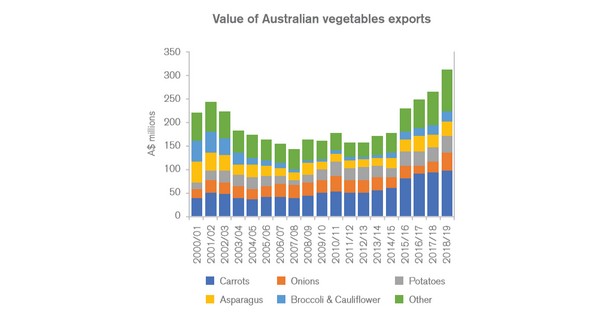 Potato exports also increased significantly in 2018/19, growing by $5.8 million (+18.7 per cent) to a value of $36.5 million. Australia exported 30.3 per cent more potatoes in 2018/19 but the average export price declined for a second consecutive year, falling 8.9 per cent to $720/tonne. Export volumes increased most noticeably to Singapore, Indonesia, Philippines, Thailand and the UAE to fill a gap in supply created by lower European production in 2018.

Production of onions, carrots and potatoes is expected to increase again in 2019/20, but production will be challenged by dry conditions and rising water prices. This may affect the viability of vegetable production for some growers and result in lower production and therefore lower exportable supplies. 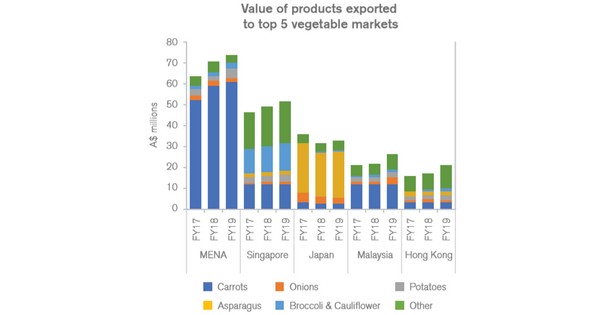 Singapore continued to be a growth market for a wide range of Australian vegetable exports and recorded a sixth consecutive year of growth in value in 2018/19. Growth was recorded for all vegetable types except for carrots. The largest growth commodities to Singapore in 2018/19 were onions (+34.7 per cent) and potatoes (+31.1 per cent).

Malaysia was a large growth market for Australian vegetable exports in dollar terms, increasing by $4.6 million. Growth in export values to Malaysia were recorded for all vegetable types except for carrots. Onions were the largest growth commodity, increasing by $1.8 million (+149.2 per cent). 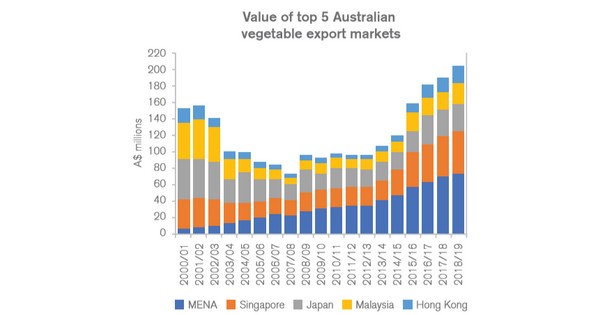 The largest growth markets for Australian vegetable exports were both outside of the top five markets, with the EU and US both increasing in value by $10.5 million. Exports to the EU were dominated by onions, which were drawn to the market as prices increased after poor local production. Exports to the US were predominately unspecified mixed vegetables.

For the full report on the Australian trade, please click here.