The plum season ended unspectacularly: The availability shrank, the quality weakened and the demand was also limited. Local Presenta and Hauszwetschge formed the foundation of the sparse assortment in which the Stanley from Eastern Europe took a slightly larger role than before. The Polish Presenta supplemented the range of goods in Berlin, French the German Top and Elena completed the ranges. 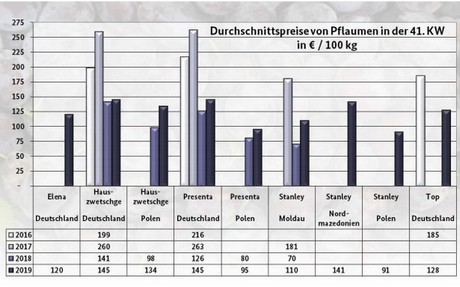 Fruits of convincing quality became scarce; people had to dig deeper into their pockets. Inconsistent organoleptic properties meanwhile widened the price range in both directions, as soft offers naturally reduced prices. Susine plums ​​from Italy and Spain saw a nice demand. Prices generally remained at the previous level, as supply and demand harmonized sufficiently with each other.

Apples
Germany dominated the markets. Locally, sales dropped off, as the holidays made for a reduced customer demand. On several occasions, however, sales accelerated as a result of the cooler autumn weather.

Pears
Italy prevailed with Abate Fetel, Santa Maria and Williams Christ. In general, the demand could be satisfied without difficulty. The marketers mostly adapted their supplies to the demand.

Table grapes
A wide and extensive range of goods was waiting for the customers: first and foremost there were Turkish Sultana and Greek Thompson Seedless. Italy mainly sent Italia, Crimson Seedless and Michele Palieri.

Lemons
Thanks to their convincing quality, Primofiori lemons from Spain and Enterdonato lemons from Turkey quickly gained a large market share. Due to the large shipments from Spain and Turkey, the products from South Africa and Argentina lost in importance.

Bananas
Demand not too spectacular. Frequently, volumes coming in from the ripeners correlated well with the accommodation possibilities. As a result, distributors were often able to fix their prices.

Cauliflower
The markets were sufficiently supplied with the predominant domestic lots. Belgium and Poland complemented the ranges with small volumes, and the Netherlands shipped in not as much.

Lettuce
The presence of domestic and Belgian lettuce became more obvious. However, demand was limited in some places. Therefore the marketers reduced their prices, which increased the turnover speed.

Tomatoes
Availability expanded. The Netherlands and Belgium dominated the booths. Spain gained in importance in the tomatoes and cherry tomato segments, which on various occasions had a negative impact on the prices.

Sweet peppers
Deliveries from Spain became more prevalent. Together with the Dutch shipments, they formed the foundation of the assortment. Turkey sent only green and red goods; yellow peppers were lacking completely.