Australian fruit exports experienced an eighth consecutive year of growth in value in 2018/19. At $1.39 billion, fruit exports have grown by over a billion dollars in value at a compound annual growth rate of 20.0 per cent since 2010/11. The growth in 2018/19 came from an increased volume of exports, combined with higher prices on average. Table grapes led the growth along with a continued expansion of exports to China.

Table grapes recorded the largest growth in export value in 2018/19, increasing by $176.4 million (+43.7 per cent) to $580.3 million. A larger area planted to grapes and improved yields led to increased production in 2018/19 which was reflected in a 31.9 per cent increase in export volume. Demand, primarily from China, outpaced supply growth and led to a 10.7 per cent increase in the average export price. Planted area increased again in 2018/19 which will continue the growth in supply in coming years.

The value of orange exports increased by $28.0 million (+10.0 per cent) in 2018/19 to $308.1 million. Increased price was the key driver of increased export value, offsetting a 1.0 per cent decline in volume after production was reduced due by dry conditions and high water prices. Similar conditions in 2019 are expected to lead to another year-on-year decline in production over the July to September harvest period and further reduce export volume for 2019/20. 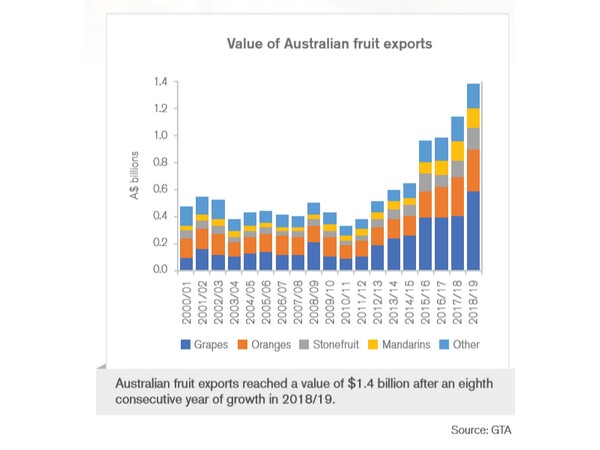 Stone fruit was also a significant growth category in 2018/19, increasing by $41.2 million (+32.3 per cent) in value to $168.4 million. This occurred due to the combination of a 28.3 per cent increase in export volume and 3.1 per cent rise in average export price. The trend of increased volume and price leading to increased value was consistent across the major categories of cherries (+$17.3 million), nectarines (+$11.1 million) and peaches ($7.4 million). Confidence is growing in the stone fruit sector as increased production is being met with growing demand. This is likely to encourage further expansion in production.

Major export markets
Australian fruit exports to China increased in value for the ninth consecutive year in 2018/19 with growth shared across grapes (+$70.1 million), stone fruit (+$38.1 million) and oranges (+$31.5 million). Growing import demand was assisted by tariffs on Australian fruit (except for oranges and mandarins) being eliminated on January 1st 2019. Increased production in Australia is likely to result in further growth in export values to China. 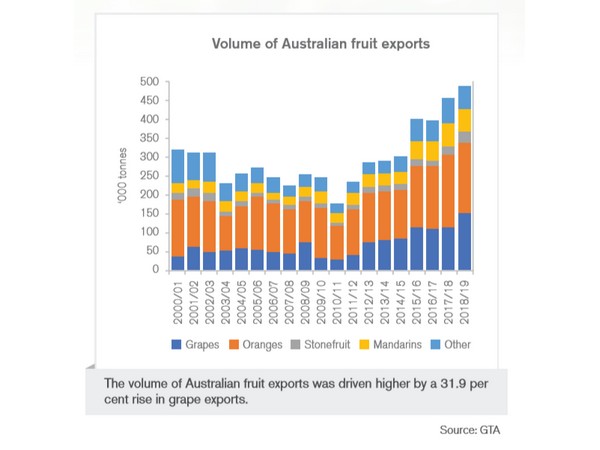 A seventh consecutive year of growth in the value of fruit exports to Japan in 2018/19 was primarily driven by growth in grape exports of $12.4 million (+30.1 per cent). Grape exports have benefited from expanded production in Australia and growing demand assisted by preferential market access under the Japan-Australia Economic Partnership Agreement (JAEPA). Orange and mandarin exports both recorded modest growth of $1.6 million and $1.1 million, respectively.

The value of exports to MENA declined for the third consecutive year as the region has struggled to compete against higher prices offered by Chinese buyers. This was particularly evident for orange exports which declined by 47.4 per cent in value.

Vietnam has emerged as a strong growth market for Australian fruit with a fourth consecutive year of growth in 2018/19. Table grapes accounted for two-thirds of fruit export value to Vietnam and grew by 84 per cent. Lower growth has also occurred for oranges and cherries.

To read the full report on all Australia's agricultural trade, please click here.