Research has been done on the profitability of blueberry cultivation in the Belgian region of Flanders. This was done at a Belgian fruit cultivation test center, known as pcfruit. The study was part of a thesis at the University of Leuven. The current (global) market and future opportunities were looked at, reports the Boerenbond Farmers Association. 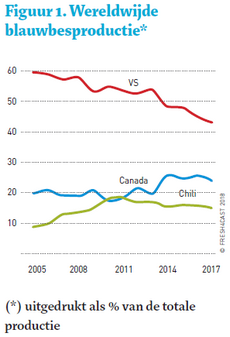 Firstly, global production, consumption, exports, and imports were mapped out. Figure 1 shows the most important production countries' worldwide production in the period between 2005 and 2017. The United States is clearly the largest player. The Americans have, however, lost some of their market share in recent years.

This can also be seen in the plantations across the world. There has been steady growth in Asia and Central America. This growth makes 2016 the first year in which North America could account for less than 50% of new plantations.

After the US, Canada and Chile are the largest producers of blueberries. There is also a significant expansion of this product's acreage in Europe. Between 2012 and 2016, this grew by 65%, and production almost doubled.

This growth is, firstly, thanks to the blueberry's many health benefits. These have been promoted by the media in recent years. On average, Belgians eat about 441g of blueberries a year. In the United States, this is more than 1kg per person. Based on average consumption, there is, therefore, still a growth margin in the Belgian population.

To meet the rising blueberry consumption, Belgium - and by extension, the whole of Europe - relies on imports. Figures from the UK-based tech company, Fresh4cast, indicate that from October to April, most imports are non-European. From April onward, the country imports mostly European berries.

At that stage, European imports are also the Belgian growers' main competition. Blueberry prices are put under pressure at times. This is undoubtedly the case when the southern and western European production periods overlap with the beginning of the Belgian harvesting season. 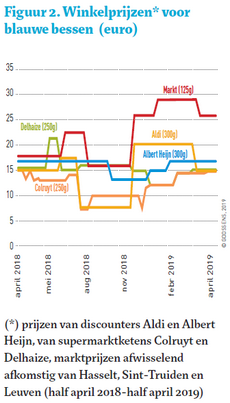 The thesis also focused on store prices for blueberries in Belgium. Those between April 2018 and April 2019 were considered. In Figure 2, you can see Delhaize and Albert Heijn's prices are relatively consistent. Those of Colruyt, Aldi, and the weekly market fluctuate more over a year.

pcfruit noted another striking drop in Flemish growers' sales prices. This was in July and August. The higher autumn prices made up for this. This price decrease has started as early as June in recent years. This fall is due to the overlapping of the South and West European production periods.

These price fluctuations have spurred many growers to sell their blueberries via short chains. They have also started spreading their crops out. The farmers use various production systems as well as different blueberry varieties.

Spreading out crops
It is not only full soil blueberry cultivation that is on the rise. More and more blueberries are also being grown in containers. Container cultivation does not only offer more flexibility. Growers can spread out their crops.

It also allows for cultivation in any type of soil. Blueberries, after all, need specific soil conditions. These cannot be found everywhere in Flanders. The disadvantage to container cultivation is that it is more intensive the conventional full soil cultivation.

Harvesting redistribution can be achieved by using canopies. Depending on the desired result - bring the blueberry harvest forward or delaying it -  the plants are covered before or after they have blossomed. By closing the canopies before the buds have opened, spring temperatures rise. This hastens the entire process, from flowering to harvesting.

You can also delay harvesting by two or three weeks. This spread is achieved by shutting the canopies later. The berries are then protected against precipitation. They can remain, hanging on the bushes, for longer. This can be done without compromising on quality. These methods can be used for both full soil and container blueberry cultivation.

Harvesting can be brought forward, even more, when it comes to container cultivation. Heated or non-heated greenhouses can be used to achieve this. Growers can delay blueberry crops by using artificial cooling. With container cultivation, higher density growth can also be an option. This type of growth can be done to get the maximum production per hectare more quickly.

Lastly, farmers can spread their blueberry crops out in another way. They can do so by cultivating late or early varieties. Different varieties can create a spread of almost two months. These varieties can also be combined with the desired production systems. People doing this can bring blueberries to market for a more extended period. They can spread their risk too.

The coming years will show Belgian blueberry growers where the opportunities lie. They will also indicate which periods these farmers can best focus on.