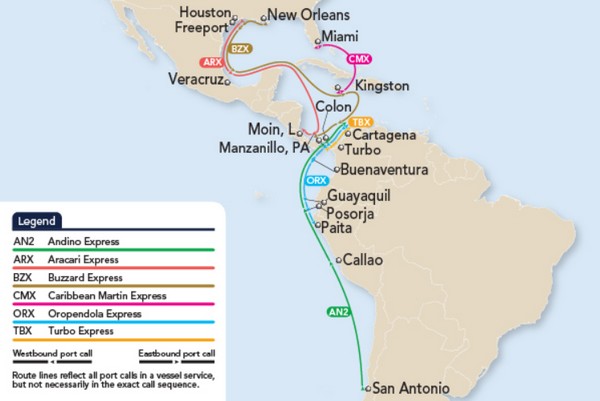 The new services are primed to diversify APL’s service coverage across Latin America, strengthening its offering to its North, Central and South America customers. The new ORX and AN2 services will specialize in carrying reefer cargoes such as fruits, vegetables and seafood from the key ports in Chile, Peru, Ecuador to the US East Coast. The TBX service will offer new coverage in Turbo, Colombia for refrigerated fruits to Asia.

The new Oropendola Express (ORX) will be a weekly service that calls Colombia, Peru, Ecuador and Panama. It will facilitate shipments to the US East Coast from the relay hub of Panama. ORX will set sail from Guayaquil on 31 October with the following port rotation: Cartagena – Buenaventura – Paita – Posorja – Guayaquil – Manzanillo, PA – Colon – Cartagena.

The Andino Express (AN2) will string Chile, Peru, Ecuador, Panama and Colombia weekly, facilitating shipments of chilled produce to the US East Coast via the Panama hub. AN2 will commence its maiden voyage from San Antonio on 6 November with the following port rotation: San Antonio – Callao – Posorja – Manzanillo, PA – Cartagena.

The Turbo Express (TBX) will offer shippers a new and alternative port coverage at Turbo, Colombia. Providing direct connection from Colombia to Panama, the weekly TBX will start sailing on 1 November from Turbo with the following port rotation: Turbo – Cartagena – Manzanillo, PA.

The Caribbean Martin Express (CMX) will be a weekly shuttle service connecting the US East Coast to the Caribbean, plying between the ports of Miami in the US and Kingston in Jamaica. Kingston is a key Caribbean transhipment hub for cargoes heading to countries like Belize, Honduras, Guatemala and Colombia in Central America. CMX will commence service from Miami on 1 November.

The weekly Aracari Express (ARX) will directly link the US Gulf to Mexico, Panama and Costa Rica. ARX shippers will be promised access to Central America, West Coast of South America and Caribbean via the port of Manzanillo. The new ARX service will start sailing from Houston on 10 November with the following port rotation: Houston – Veracruz – Manzanillo, PA – Moin, L.