The 11 most popular types of fruit in Germany 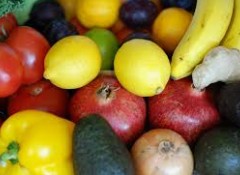 Fresh fruit is not only healthy but delicious as well. According to the Federal Office for Food and Agriculture, the Germans consume as much as 69.5 kilograms of fruit per year per person. The sales figures of fresh fruit and market fruit sales are regularly evaluated to calculate the per capita consumption in Germany based on this. This number provides information about which fruits the Germans love the most.

1. Apples
21.3 kilograms of apples per year are consumed per capita.

2. Bananas
Per capita, 12.4 kilograms of bananas are consumed annually

4. Peaches
Per capita, 3.9 kilograms of peaches are consumed annually.
Peaches can also be grown in Germany, but Germany plays a rather subordinate role among the world's largest peach producers. Peaches are sold primarily as fresh or preserved fruit.

6. Berries
Every year, 3.1 kilograms of soft fruit (huckleberries, elderberries and other berry fruits such as cranberries) are eaten per capita

7. Pears
Per capita 2.6 kilograms of pears are consumed annually

11. Apricots
Each year 0.9 kilograms of apricots are consumed per capita.