Scientists at Londrina State University have evaluated the effect of S-ABA on color and anthocyanins of Benitaka table grapes at different timings of veraison.

Grapes grown under warm climate conditions tend to show less color development, and this phenomenon is due to low anthocyanin accumulation in berry skin in response to high temperature during ripening. Benitaka table grape shows poor color development when grown under a subtropical conditions, and the exogenous application of (S)-cis-abscisic acid (S-ABA) is a novel developed technique used to overcome this critical issue. 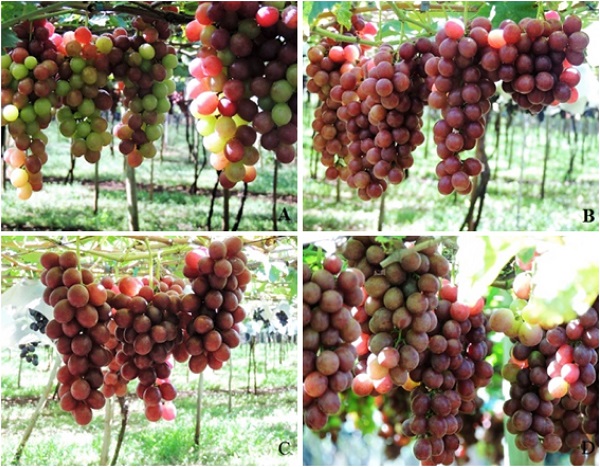 Bunches of Benitaka table grape treated with (S)-cis-abscisic acid (S-ABA 400 mg/L) at different timings of ripening. A: Control (no application); B: At pre-veraison; C: At veraison; D: at post-veraison. A second application of S-ABA 400 mg/L was performed for all treatments 10 days after the first application, except for the control.

For the study, the trials were conducted during two crop seasons in a commercial vineyard with 11-year-old Benitaka vines grafted onto IAC 766 Campinas rootstocks in Marialva, State of Parana (PR), Brazil. The vines were trained on an overhead trellis system, covered with a black plastic mash, and spaced 3.0 × 6.0 m apart. The treatments included the application of 400 mg/L of S-ABA at different stages of ripening, as follows: Control (no application); At pre-veraison (PRV) (7 days before veraison); At veraison (V); and At post-veraison (POV) (7 days after V). A second application was performed for all treatments, 10 days after the first application, except for the control. The different timings of veraison were identified by means of soluble solids content, firmness and color of berries.

"The exogenous application of S-ABA from PRV to POV significantly improved the contents and rates of total anthocyanins accumulation and the color index of red grapes; however, the application at PRV and V provided a higher response - The scientists explain - A stronger correlation exists between anthocyanin concentration and the color index of berry skin, however, the main physicochemical characteristics of berries are not significantly affected by the use of S-ABA. Berry firmness varies in response to S-ABA application, but not to an extent at which it compromises berry quality for commercial use".