In 2017, the California State Legislature gave approval to name highway stretches after five fallen Monterey County veterans. The Senate Concurrent Resolution (SCR) 57 is designated for the Fallen Heroes Highway Memorial Project which was authored by State Senator Anthony Cannella and State Senator Bill Monning. The resolution was sponsored by the County of Monterey as Supervisor Luis Alejo originally proposed the legislation.

D’Arrigo California is a supporter of the Fallen Heroes Highway Memorial Project. The project was created to honor five local veterans.

"These highway stretches will now forever carry the names of our five fallen heroes of Monterey County," said Supervisor Luis Alejo. "These veterans paid the ultimate sacrifice for their country and now, we can honor them by installing highway signs that will make sure their names and sacrifice will never be forgotten by our local communities. We applaud our biggest supporters John and Sandy D’Arrigo for helping make this project a reality for the five Gold Star families.”

John D’Arrigo, D’Arrigo California Pres./CEO and Chairman of the Board stated, “When Supervisor Alejo called me to support the Fallen Heroes Highway Memorial Project, I agreed immediately. Sandy and I are committed to honor the veterans and the gold star families who have lost loved ones in Afghanistan. I believe it is our civic duty to participate in the project as a family and company to honor not only the fallen soldiers but all soldiers around the world serving and protecting our country.” 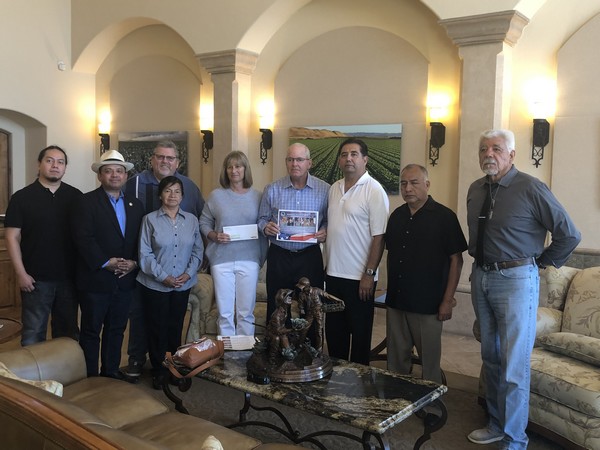 The signs will carry the names of these five veterans who died in combat:

"Our family is proud to see this effort launch to install these highway signs that will honor my son and other Monterey County veterans who were killed in action," said Ricardo Cerros, Sr., father of U.S. Army Ranger Ricardo Cerros, Jr. "We feel supported knowing our local communities have not forgotten their sacrifice and that we will have help to raise these necessary funds."

John D’Arrigo and his wife Sandy D’Arrigo presented a check to support the Fallen Heroes Highway Memorial Project to Monterey County Supervisor Luis Alejo. The photo above was taken during the check presentation at the headquarters of D’Arrigo California in Salinas, CA.