Chilean Raspberry Varieties and their Adaptability in the Ñuble Region Seminar

The Chilean Raspberry Varieties and their Adaptability in the Ñuble Region Seminar was recently held with the objective of delivering technical information on the first 100% Chilean raspberry varieties: the Santa Catalina, Santa Clara, and Santa Teresa, which were developed by the ASOEX Fruit Technology Consortium and the Catholic University.

The activity was organized by the ASOEX Fruit Technology Consortium, together with the Municipality of San Carlos and INDAP, through the San Carlos Local Development Program (PRODESAL), with the support of the official nurseries of the Consortium: Novaberries and Sunnyridge.

The day was attended by Manuel Pino, the Mayor of Niquen; Mauricio del Río, the head of Serplac and representative of the mayor of San Carlos; Maria Elena Diaz, the head of INDAP's San Carlos area; Sergio Maureira, the Manager of the Fruit Technology Consortium; Marina Gambardella, the Director of the Raspberry Genetic Improvement Program and academic of the Catholic University; as well as an important group of raspberry producers and peasant family agriculture (AFC) of the Ñuble Province that are interested in producing raspberries, agricultural technicians and professionals, advisors and people from the AFC. 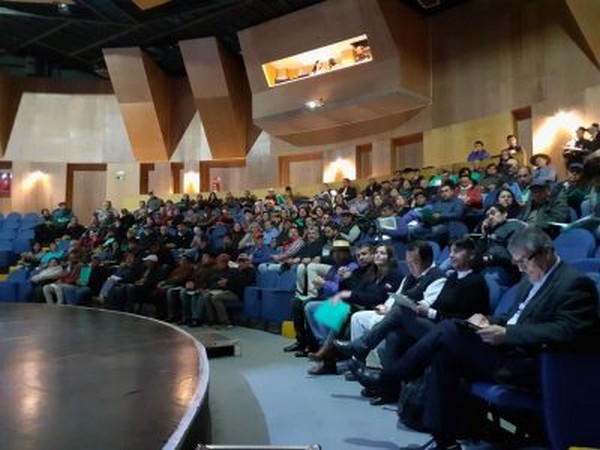 The day began with a video greeting from Ronald Bown, the president of the Fruit Technology Consortium, who highlighted the good behavior of the Santas varieties in the areas of the country where they are being cultivated. According to Bown, these varieties “were created with the aim of improving the competitiveness of peasant family farming and small farmers in Chile.”

In the same vein, Sergio Maureira stated that “one of the objectives of our raspberry genetic improvement program is to support the development and growth of small raspberry producers in the country. This type of conference allows us to reach them and inform them about the characteristics of these raspberries, which, apart from being 100% Chilean, have better calibers and yields than the Heritage variety, which is the most planted raspberry variety in the country.”

In turn, Marina Gambardella spoke about the characteristics of the Santas varieties and gave recommendations for their agronomic management. The professional stressed that the main varieties of raspberries produced in Chile were the Heritage (84.6%), Meeker (8%), Chilliwack (5%) and Amity (1%) varieties and that the Santas varieties have better characteristics than many of them. For example, she said that the Santa Catalina variety's average fruit weight was 4.2 grams, while the Heritage was 3.02. The average weight of the Santa Teresa fruit is 6,09 grams and that of the Santa Clara variety is 4.1 grams. These and other features make them very good for the fresh and frozen segments. 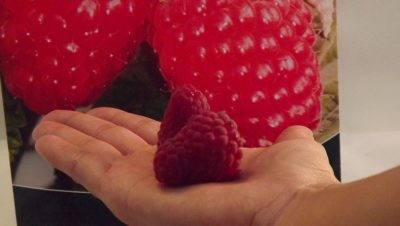 Transfer through Experience
To explain the characteristics of the Chilean Santa Clara, Santa Teresa, and Santa Catalina raspberries and how they were responding, they made public the experiences that the producers had with them through the initiatives carried out in Teno, the Maule Region, and in Chol-Chol, in the Araucania Region.

Nelson Gonzalez, an agronomist, and coordinator of the La Araucania Pilot Project of the Fruit Technology Consortium was in charge of presenting the positive results of the plantation of the Santas that small producers of that region had. He also spoke about the technical matters that producers should take into consideration to obtain good results when cultivating them.

“This pilot project benefits 21 producers in the region, who through an agreement between the Fruit Technology Consortium and INDAP, have been able to acquire Santas plants, as well as material and technical support for their production process. Producers have been able to plant 0.5 hectares each, with a total of 864 plants of Santa Catalina and 1,728 plants of Santa Clara. They had very good productive results and economic yields with both of them, as these varieties have a greater caliber that allows them to generate more kilos and get better prices,” he said.

Carolina Rivera, an Agronomist of the Prodesal of the Commune of Teno, presented the work being carried out in the area with the Santas. “In Teno, we started with the installation of experimental or demonstrative orchards so that producers could visualize how these varieties behave in the commune of Teno, how they are managed and their yields. The idea is that these orchards serve as a technology transfer platform for those who have raspberries, but also as a place where producers who wish to innovate can learn how they develop in the area. The new varieties have given very good results if we compare them with the Heritage variety, which in the best case scenario yields 12 tons per hectare. Meanwhile, the Santas yield 18 tons per hectare and have a very good caliber. After verifying that the varieties work, we applied for several projects through INDAP, as is the case of the IFP project for the establishment of new varieties for small producers of Teno,” she said.

Within the Biobio Region, Ñuble had the highest surface of fruit trees, with 79%. Among the most important items, those that were in greater proportion in the new region are raspberries (92%), kiwi (89%) wine grapes (85%), and cherry trees (80%). 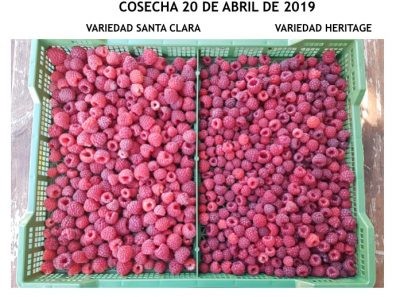 The Santas varieties are 100% Chilean
The Santas are of the remontant variety and are highly productive. They have yields of 20 tons per hectare. They stand out due to their great caliber (between 4 to 9 grams of weight depending on the variety), great adaptability to different climatic conditions, high productivity, and because they can produce fruits several times a year.

Santa Catalina is a semi-erect raspberry variety that can produce fruits several times a year, the plant grows up to 1.75 meters tall, it's fruits are medium-sized and have an average weight of 4.23 g and a maximum weight of 7.3 grams. This variety produces fruits earlier than the Heritage variety. Each plant can produce up to 832 grams in the first year, i.e. twice as much as the Heritage. It has a Brix degree of 10.10 and an acidity of 1,2%.

In turn, the Santa Clara variety is a day-neutral plant that has a semi-erect growth and can get to be 1.85 meters tall. It yields middle-sized fruits that weigh an average of 4.13 grams and a maximum weight of 6.2 grams. This variety also produces fruit earlier than the Heritage variety and has a very good performance, as each plant can produce up to 764 grams in the first year, i.e. twice as much as the Heritage. The fruit has a Brix degree of 10.13 and an acidity of 1.4%.

The last variety is the Santa Teresa variety, a day-neutral plant that can grow up to 1.70 meters. Its fruit is large, weighs an average of 6.09 grams, and has a maximum weight of 9.3 grams. As the previous varieties, it yields fruits earlier than the Heritage variety. Its performance is very good and each plant can yield up to 758 grams in the first year, i.e. twice as much as the Heritage. It has a Brix degree of 9.80 and an acidity of 1.9%.