Tropical storm Narda continues to make its way along the west coast of Mexico. Narda initially made landfall last Saturday in Oaxaca before moving offshore and subsequently weakening. However, it strengthened again on Monday and has since traveled along the coast from Guerrero as far as Sonora.

Winds of upwards of 40mph have been recorded in a number of areas, but the main damage from the storm system has been heavy rainfall, causing flooding and landslides in several states. At least two people have been killed - both of them in Oaxaca. Most of the damage has been confined to the coast, with roads and buildings damaged. This has cut off a number of communities who will now have to wait for the road damage to be repaired.

No reports of damage to crops
None of the growers that FreshPlaza spoke with reported any damage from the system. "We have not received any damage from the storm," said one grower of hot peppers in Sinaloa. "We recorded a lot of rain, but it was not anything out of the ordinary. Most of the rain occurred closer to the coast."

"We have not heard of any damage from our partner growers in the region," said another Los Angeles-based company. 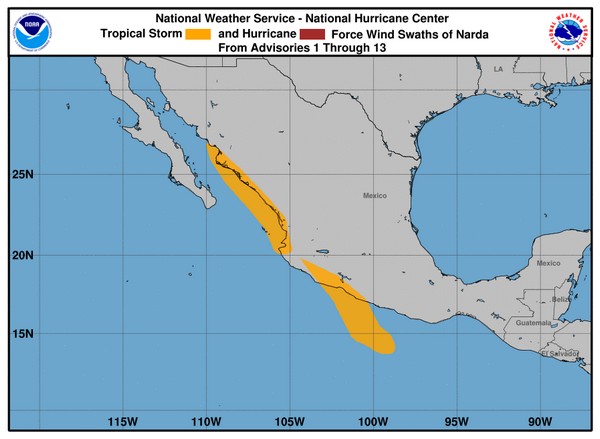 Rain beneficial for some crops
Some crops that are not in season right now, such as mangoes, appear to have benefited from the additional rainfall. Growers say conditions were relatively dry earlier in the year, especially in the western Mexico growing areas. The rainy season has been good though, and the rain from Tropical storm Narda has been welcomed by mango growers.

"This storm, and the rainy season in general, so far have been very good for the orchards," shared Nissa Pierson of Crespo Organic. "There has been plenty of rain which the trees and the ground need at this point."

"Since our crop in that area has just finished, all the water dumped on the orchards was beneficial, especially as there was no live fruit to risk," she added. "Those trees won’t flower for another six months, so filling water tables is key for later down the road. That being said, the storm was heavy and hard for many folks living on the coast."

Although Narda has since dissipated, the remnants of the system are approaching the United States and is expected to bring rain from New Mexico all the way to the Midwest over the next few days.