Will the rest of the glasshouse soft fruits follow strawberries' growth?

Could blueberry, blackberry or raspberry glasshouse cultivation follow in strawberries’ wake? Who knows? The potential is certainly there. The cultivation of other soft fruits under glass is slowly increasing in the shadow of glasshouse strawberry cultivation. More and more growers are looking into ways of bringing their harvests forward, with the ultimate goal of year-round, profitable greenhouse cultivation. But, before it gets to that, certain standards still have to be met. 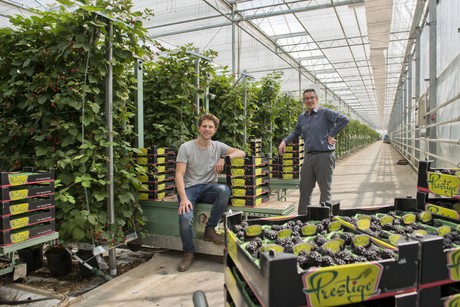 Wouter with his father, Jaco, in the greenhouse

“Bring it forward a week every year, and we will get there,” says raspberry farmer, Geert-Jan van Tuijl; jokingly when asked whether year-round raspberry greenhouse cultivation is feasible. “It is, of course, not that easy. But, every year, you do try to be that little bit earlier; to be one of the first on the market. We can harvest from about the end of March until the end of June. That gives you a good start. It is, therefore, important to hold on to the clients you have then. We then harvest again from the beginning of September until midway through November.”

With 3,5 hectares of greenhouse under raspberries in the province of Zaltbommel, the Netherlands, the Van Tuyl Raspberry Nursery is good for more than a tenth of the total Dutch acreage of 26 hectares. This makes it, aside from strawberries, the second largest soft fruit greenhouse cultivation in the country. In first place is blackberries which totaled 31 hectares in 2018. In 2018, this fruit was cultivated under glass on a total of 123 hectares in the Netherlands - almost double the size compared to 2015 (64 hectares). Detailed figures from the previous years are lacking, indicating that this type of cultivation is still in its infancy. The same is true for Belgium, where, although not double, the more than 67 hectares under cultivation in 2018, is a sharp increase from the more than 49 hectares in 2015. 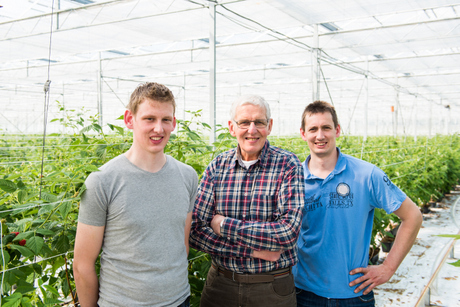 Geert-Jan and his brother, Kees, with their father, in a photograph in the raspberry greenhouse

Many growers have taken up this type of farming, especially in recent years, encouraged by sharply increasing consumption. GroentenFruitHuis has seen the volume increase by 30% in the Netherlands in five years, with consumer spending rising by as much as 77% in the same time. This increase is, of course, also attributed, in part, to people buying full-ground and imported products. Geert-Jan and his brother, Kees, switched to this method of cultivation in 2015. In their own words, they did so to distinguish themselves - something that was becoming increasingly difficult to do in the bell pepper market, and, what is more, in an older greenhouse. “But, it is not a step you take without any forethought. You must be suited to, in particular, the peaks times of work.”

Lit cultivation test projects show potential
Blackberry farmer, Wouter van den Bosch of Bosch Fruit in the Dutch town of Berkel en Rodenrijs, knows these peaks in work all too well. He has been growing blackberries on 1,3 hectares since 2017. He does this along with cultivating bell peppers at a different location. According to him, there is still much to learn about this relatively unknown form of cultivation. “How does the plant, for example, react to lighting? That is something we have very little knowledge about, so we are doing experiments with this, along with crop researchers.” 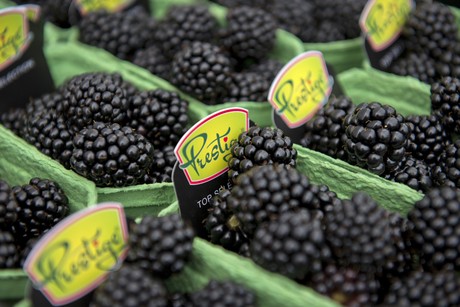 Just like with raspberries, where similar tests are being conducted. This hints at the fact that growers and researchers see the potential of year-round cultivation. A group of blackberry and raspberry growers has regularly been meeting for some time now. They discuss, among other things, the hurdles facing this type of cultivation. These meetings are an initiative of the Dutch Greenhouse Horticultural Branch Organization and the Dutch Fruit Growers Organization. They want to adequately address growers’ interests. Has the market situation been a topic of discussion yet? “No, not yet,” Wouter says. “To my knowledge, not much has been said about this yet. First, there are other challenges, but I would certainly be open to a discussion about putting blackberries on the market. That is, after all, a major challenge for a relatively small product like the blackberry.”

Dutch and Belgian strawberries are now firmly established. This is more difficult to do for other soft fruits. Geert-Jan: “Finding buyers who want to pay a constant price, especially if you want to sell your product in the winter, is difficult. That is mainly because it is still challenging for us, as growers, to guarantee supply. This guarantee is a condition for getting a foothold in the year-round market. Supermarkets want to be sure of their supply and its quality. And we cannot yet offer this year-round. You could compare it to the rise in the popularity of lit cultivation tomatoes. That was also difficult for a few years. Only once there was a sufficient constant supply that supermarkets could rely on - so they did not have to switch to other suppliers - did tomatoes that had been grown under lights, land on store shelves.” 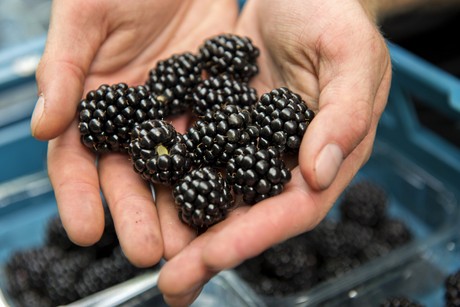 Blueberries’ shelf life is a disadvantage
In the winter, supermarkets still look south for much of their soft fruit supply. It is easy to import products from Spain and Mexico in the winter, thanks to low transport costs. These are formidable competitors that local blackberry and raspberry farmers will have to vie against if they were to have continuous products available. This is even more of a challenge for blueberry growers. Compared to blackberries and raspberries, growing blueberries under glass is still a very specialized activity. The vast majority of production takes place outdoors, whether it be covered or not. Growing blueberries in a greenhouse is really about capturing the little corners of the market. Here too, it is a form of art for growers to be first on the market. If there is good spring weather, the greenhouse grower’s lead over outdoor growers becoming even more limited. Growers cannot base their entire business models on this, often, just more than a week’s advantage.

The cost price of covered cultivation, even if it is only with net or plastic-covered outdoor cultivation, is simply too high. Blueberries, unlike raspberries and blackberries, also have a good shelf life, by far, since blueberries can be well stored for a month or even longer. This extended shelf life means the market is flatter, and greenhouse growers cannot benefit from peaks in the market. 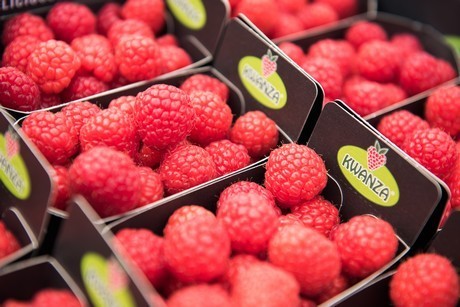 Everyone’s favorite
Wouter and Geert-Jan do see such peaks in the blackberry and raspberry market. Wouter: “Price formation in the blackberry market is difficult. There is still a lot of fluctuation. Sometimes the product is so cheap; you cannot even cover your labor costs. Then, not much later, it suddenly becomes so expensive that none of your clients can sell them. This is, of course, not a workable situation for anyone. We are currently still selling a lot based on daily prices. It would be better if we could draw an average from this. We are looking hard for contracts, but they are difficult to find. Not many places seem to be open to this at the moment. A long-lasting shortage on the market might change that.”

Some marketing would also help the growers position their products even better in the market. This is a little easier for raspberries than blackberries. According to Wouter, the latter is less of an ‘everyone’s favorite’ than strawberries, and to a lesser degree, raspberries. Geert-Jan eagerly points out strawberries’ strength which is - besides people loving how it tastes - that it is also available in large volumes of good, stable quality. This combination means consumers, and, therefore, supermarkets are increasingly favoring locally-grown strawberries above those from the Southern countries. 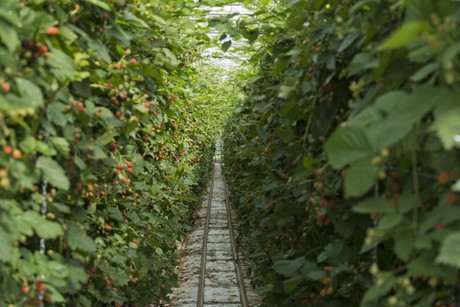 If you look closely, you can see the blackberries’ growth stages before they are entirely ripe

These soft fruit farmers are convinced of their products’ taste, but to give consumers a little push in the right direction, Geert-Jan is also hoping for another possible incentive. “In our first year’s marketing, we strove for continuity and quality. We want to expand on this in the coming years. The goal is that when supermarkets think to buy raspberries, they think of us. Currently, due to a lack of sufficient supply in the winter, supermarkets are, in the growers’ opinion, still opting too often for imported products in the spring and autumn. These imported products are cheaper. Labor costs are lower in other countries, and transport is less expensive.”

“That is why I hope the products’ CO2 footprint will appear on packaging again. That can only help to get consumers to choose us. Dutch and Belgian farmers can get ahead on the sustainability card. Just as in the areas of reliability and meeting agreements. We are already good at that, but to catch up to strawberries, we must greatly increase production."