The price of pears is currently normal in most European countries, but it is expected to rise in a few weeks. A dramatic reduction in the Italian pear harvest will result in prices considerably increasing for a number of varieties. This is especially the case of the Abate Fetel, whose price is reaching astronomical figures, not seen in the sector for a long time. 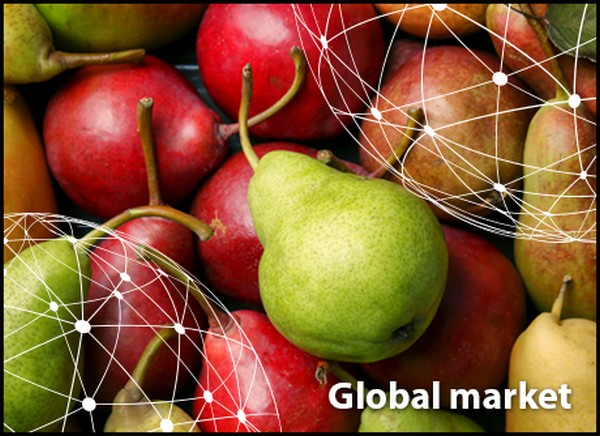 In other countries, the pear yield also seems to be falling. In Latin America, volumes are falling due to the low price on the market. In contrast, the production has increased in Australia and China.

The Netherlands: Export Conference pears already higher than last year
The last Dutch pears are currently being marketed. The sale of the pears from ULO-storage will start within a week. The quality of Dutch pears is better than last year, with a higher Brix and longer shelf life. The price level of the pears remains stable. Traders expect an increase within a few days, when the pears from ULO-storage will hit the shelves. The export of Conference pears is already at a higher level than last year.

Belgium: Prices are expected to rise
There is some trading going on with Conference and Doyenne du Comice pears, but a Belgian trader expects the demand to pick up in early October. The prices for the Conference are currently normal for the time of the year, but when the demand goes up, as it is expected to do, traders say that prices will increase as well. The quality of the pears is good and sizes are a lot better compared to last year.

Germany: Issues with Italian harvest already causing price increase
At the moment, the demand in Germany can be said to be between weak and acceptable. The Italian Abate Fetel and Santa Maria dominate the market, as expected, while domestic pears (including Williams Christ & Clapps Liebling) are increasingly present on the shelves. The price of Italian Abate Fetel is already rising (at this early stage of the season) in various wholesale markets.

Italian exporters are already talking about the worst harvest of the last 10 years. In total, the yield will be at least 30 percent lower than last year's, and this percentage may even go up to 50 percent in some places, according to an exporter. Apart from the rainy weather during the flowering period, a large part of the harvest has been affected by stink bugs, and that fruit is no longer accepted as class I by retailers. "This will undoubtedly cause significant shortages later in the season," reports a trader.

France: Harvest drops by 14% this year
The season of the early varieties, Guyot and Williams, has come to an end, with the harvest now shifting to the Conference. The quality is good this year due to the warm weather and the pears contain a good percentage of sugars. This year's production volume is somewhat smaller this time and it will probably generate 14% less revenue than last season. Given the low demand for pears, the market is currently still in balance. Growers hope that by offering good quality fruit, prices will rise.

Italy: Hailstorms, fungal disease and bugs, a dramatic season
It's a very poor season for pears in Italy, both for the summer and autumn harvests. The problems derive from a series of concomitant factors: first of all, the spring weather conditions did not favor the fruit setting. Then, the explosion of the Alternaria disease, a fungus that causes fruit rotting. Furthermore, there have been hailstorms in large production areas, such as in Emilia Romagna. The worst adversity of 2019 has been the Asian bug (Halyomorpha halys) which caused much damage, with fruit being deformed due to insect punctures. Only the orchards totally protected by anti-insect nets have at least partially saved production.

The summer variety Carmen recorded an average decrease of 25% in volumes. The quality, however, was very high and the prices paid to the producers were above the average, around 85 cents/kg. A similar situation occured for the Santamaria variety, while for Williams the range was between 70 and 75 cents/kg. However, higher than average prices do not compensate production losses, which are estimated to be between 20 and 50% for the early product.

Regarding the Abate pear, which is the main variety in Italy, the harvest has just ended. The production decline is dramatic, between 50 and 60%. There are companies that have obtained less than 10 tons per hectare of marketable production as first quality. Even if prices are higher than usual, this will not compensate producers.

Spain: High prices for Spanish pears
A 4% increase in the production is expected compared to last year. The harvest has gone well in the province of Lleida, but other regions, such as Aragon, La Rioja and El Bierzo, have had to deal with frost that has taken a toll on the quality of the fruit. This means that there is less fruit available to sell. The Bartlett and Williams are sold at good prices, especially in Italy, which is also buying pears for the processing industry. The price paid for the Abate Fetel is astronomically high at the moment. Italy has seen a sharp fall in production this year. Conference pears are also sold at high prices.

China: Drastic increase in production
The new Chinese pear season started in June with the early varieties and is now almost coming to an end. The last pears will be harvested in October. Compared with last year, the production volume has increased dramatically. Since there was a shortage of pears in the previous season due to the bad weather conditions, the price this time started high; however, as the on the market increased, the price quickly fell, which has been positive for the export of Chinese pears. This has allowed them to compete more easily on the international market, so exports have been doing well.

As regards imports, the season has started again for the Dutch and Belgian Conference pears. The market supply is expected to increase in the coming weeks; however, next week is a national holiday week, so the rise will only become noticeable after that. Conference pears are doing well in the Chinese market and the import volume is growing annually.

South Africa: Pears in full bloom
The pear orchards in South Africa are mainly located in the Western Cape and the bloom is currently underway in varying degrees. Some varieties, such as the Early Bon Chretiens (Williams) and the Forelle, were in full bloom in mid-September. About 50% of the Packhams are now in full bloom, and some varieties, such as the BCs, are not yet in bloom. In any case, the flowering in the Langkloof will take place later than in the Western Cape. This is probably due to a warm and dry winter.

The early fruit is looking good and the growers hope that there will not be another heat wave in October, as was the case in 2018, as this took a severe toll on the country's pear and plum harvest. The flowering time is about average and the winter has certainly contributed to this. Growers in the Cape would have preferred to have more rain and lower temperatures, but the water supply is adequate for this season. The harvest of pears in South Africa starts towards the end of the year. Europe and Russia are strong markets, although the industry has been hoping for years for the opening of the Chinese market to South African pears.

United States: High price for large sizes
The pear supply is looking good in the large producing regions of the US. The new pear harvest didn't start on time in all places in the state of Washington. Some regions have recorded delays of up to two weeks. California has had a late harvest this season, although sales are on par with last year's. In Pennsylvania, growers had to deal with rainfall last year, but this time the weather conditions have been good. There has been more competition this year between Argentina and Chile and the later harvest of Californian pears.

The demand is divided between the retail, wholesale and food service, each with their own preferences in terms of formats. Traders currently rate the demand as normal to good. The price of pears has fallen. High prices are paid for large sizes and low prices for small sizes. This is in sharp contrast with the past two seasons, when it was the other way around.

Chile: Growers switch from pears to cherries
The country has a short harvest taking place between January and February. The most important varieties in Chile are the Packhams, Abate Fetels and Forelle. The fruit is exported to Latin America, North America and Europe. The dry winter and cold air could have a negative impact on the upcoming harvest. The spring is now dawning in the country, and if the rain does not come too late, the harvest could still be saved.

The biggest competitor on the market is Argentina, where volumes are much higher and more new varieties are grown. The volume of pears is falling because many growers are switching from pears to cherries, given that the prices they receive for the latter are 4 to 5 times higher than those of pears. The opening of the Chinese market could, however, create opportunities.

Argentina: Volumes continue to fall
The Argentinian season starts in January and lasts until late March / early April, but the pears are sold all year round. The harvest is comparable with last year's. In general, however, the country's volumes are falling because many growers have abandoned the crop. Today's volume is about half of that achieved ten years ago. The most important markets are Brazil and North America, and Europe to a smaller extent. Prices are currently low due to the European harvest.