Sorting machines, in particular, optical sorters, are becoming increasingly important. Where, in the past, there was only one sorting machine in a plant, in 2019, there are, on average, four. Here, data collection is becoming increasingly important too. Optical sorters process more information about products to reach process optimization. A user-friendly interface also helps make the machine easier to operate.

Data becoming more important
“Data collection is, without a doubt, the most important change in the optical sorting machine market,” says Steve Raskin, CEO at the Dutch company, Optimum Sorting. “We are increasingly manufacturing client-specific machines. And these machines have to be increasingly set for specific sorting tasks, such as detecting or removing faulty products. We do this for, among others, potato, vegetable, and nuts companies in the fruit and vegetable sector.” 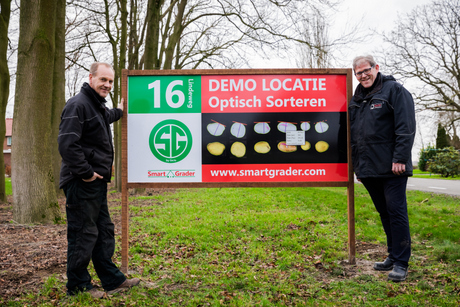 Jos Broeders, owner of Gejo Grading from Luttelgeest, in Flevoland, the Netherlands, has seen the expansion of data collection in optical sorters. “We have not only designed a new line of machines called the Smart-Grader Evolution. We have also designed a small registration belt that optically registers potatoes,” says Jos. “In addition to the potato’s size, we also calculate their numbers, volume, and weight by measuring the potatoes’ length. This is useful for french fry manufacturers who benefit from knowing these lengths and volumes. Seed potato producers can also use this data well. They can calculate how many tubers there are in a kilogram, using the volume as a measure.”

“I always say, measuring is knowing; if you guess, it might be a miss,” says Jos. “You can, after all, optimize your business using the data collected by the optical sorter. You know exactly what your company needs in terms of inventory management. By working accurately with the optical sorting machine, we contribute to the environment. We have less waste since we have more gross than net, thanks to the right sizes.” 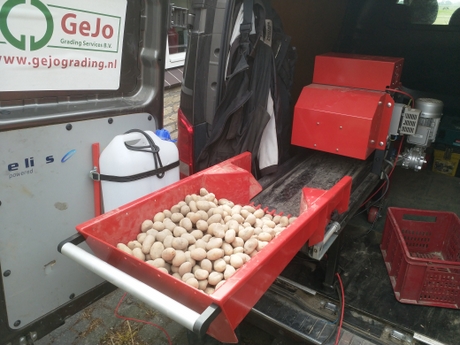 The Smart-Grader Reader for potatoes

Jos Broeders’ company is not the only one focusing on this development. “Data plays an essential role in our optical sorters’ Sort to Spec function,” says Tomra’s Alain De Puydt. “The product is delivered to the end client’s specifications, both in length and quality, with the lowest possible incorrect removals. Different clients have different product specifications.”

“We notice that companies have a greater need for data collection from their sorters,” says Kees Kelders, who works at Insort. “Our new optical sorting machine measure various things. These include the amount of peel that comes off after the product has been steam-peeled, the dry matter at different points in the process, moisture levels, product length, fat percentage, unwanted substances in the product, and so on. People can use this data for analysis and can take action based on the results. At Insort, we share this information directly with the user. The mechanical pre-sorters will remain necessary as part of the process. However, the is certainly a growing trend that will see us increasingly sort and rate products with the help of cameras and robots. Within ten years, using robots will be commonplace in the industry, and data collected by sensors will control these robots. That is what we are currently focusing on.”

Why are they important?
New technology and innovation are making it possible for one optical sorter to collect more data. Why are manufacturers collecting this data, and putting more optical sorting machines on one production line? 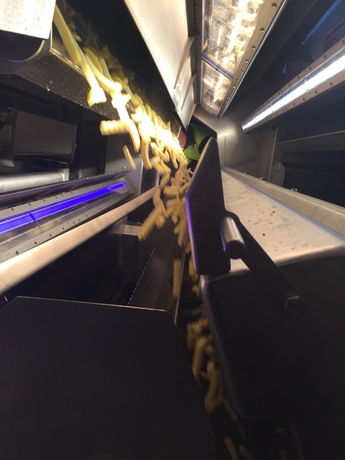 Insort’s Hybrid 2400 in action in a french fries factory

One of the reasons why the importance of optical sorters seems to be increasing is the shrinking labor market in the agricultural sector. More and more, these machines have to compensate for the lack of personnel. “There are fewer people and less knowledge on the market, and that forces growers to switch to sorters,” says Jos Broeders of Gejo Grading. “The grower just has to switch the machine on and provide sufficient bulk. An optical sorting machine does not get tired or need a coffee break.” In addition to the labor shortage, market demand also plays a role. “It is much easier to adjust an optical sorter to meet market demand.” 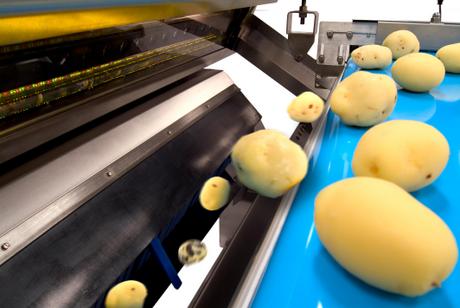 Another important reason for purchasing an optical sorting machine is improved business processes. “Increasingly precise sorting is an important trend in the sector,” says Tomra’s Alain De Puydt. “Food safety is, after all, one of the essential parts of the story. An accurate sorter makes a crucial contribution to this. For example, we sort potatoes after they have been grubbed. Then again before they go into the warehouse, before they are washed, once they have been peeled and then, lastly, when they are processed into fresh fries and frozen products,” says Alain. “At each of these points, the stream is inspected. Product-related contamination, such as foreign substances, is removed with high efficiency. Ultimately, you must do the maths: what is the minimum time it takes to recoup your investment in a sorter?” 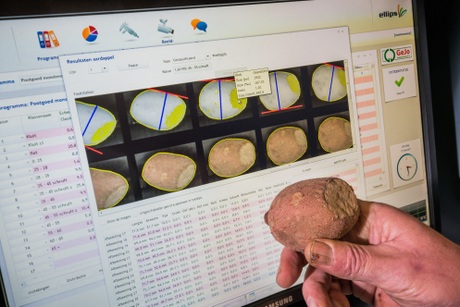 Yet another reason for getting a sorting machine is increasing the factory’s production lines’ capacity. New developments in optical sorters increase this capacity. “We are currently working on a free-fall machine. In it, we are installing an optical device consisting of eight lasers and more than 16 receivers,” says Steve Raskin of Optimum Sorting. “That is far more than in other versions, which means this machine’s capacity will be higher. Clients have specifically asked us to also design new (conveyor) belt widths. At first, we had a standard 1.200 belt width. We noticed a demand from the market for both smaller widths (900 and 600) and belt widths for more capacity (1.800).”

“One of the most innovative components of our optical sorting machine is the Hyperspectral technology,” says Insort’s Kees Kelders. “This is a sensor that can process a high capacity of potatoes on the belt.” 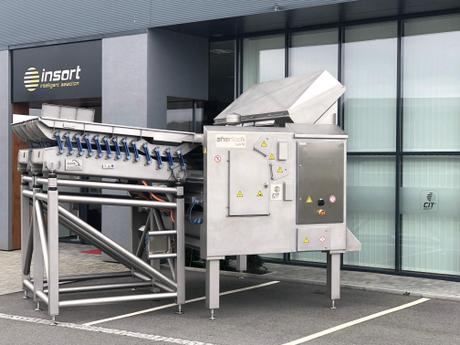 The Sherlock Hybrid from Insort

Hardly any competition
Recently, the optical sorter market has been dealing with less expensive machines from China and Eastern Europe. Yet, few companies see any danger in such competition. “We consider the optical sorting machines manufactured by Western European companies to be of a higher standard than the ones developed by, for example, a Chinese firm,” says one optical sorter seller. “A machine from China may be cheaper. But there is a higher chance of it failing and unwanted substances remaining in the product, which could lead to claims of hundreds of thousands of euros.”

“Chinese machines, for example, are currently becoming less and less expensive,” says Steve Raskin of Optimum Sorting. “But the machines we have on the market are not getting any competition from that direction.” 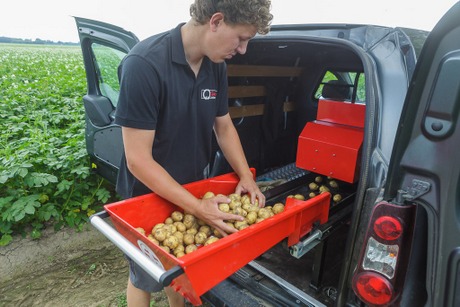 Kasper Schipper, who works at Gejo Grading, with a test system

Before and after the sorter
There are not only sorters of all shapes and sizes on the market. Some machines assist in measuring out products for the sorter, or process the products after they have been sorted. 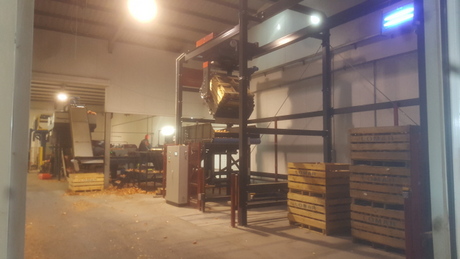 Burg Machinery supplies these dosage machines that supplement sorters all over the world.  “Our pre-sorting dosage systems as well as out post-sorting palletizing machines can contribute to the sorting process,” says Arjan. “We noticed that optical sorters are winning more and more ground, and that provided us, as a peripheral equipment manufacturer, with possibilities to offer added value.”

Burg Machinery, based in Kruiningen in the Dutch province of Zeeland, has designed several dosing applications for crated products. “We have developed a POLS hopper for carefully emptying and measuring out fragile products like potatoes, onions, and bell peppers,” says this company’s Arjan de Nood. “The emptyer automatically takes crates from the stack and places them on the conveyor belt. This action protects the product coming out of the crate and, so, delivers a continuous product stream to the machines further down the line.”