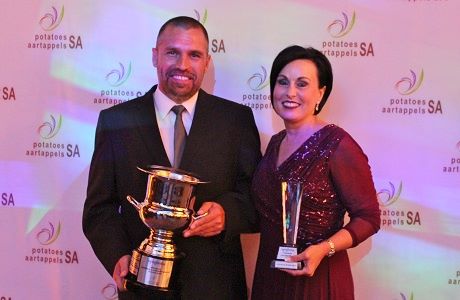 George and Marlene Barnard accept the trophy as winners of the Syngenta National Potato Farmer for 2019 (photos: Potatoes South Africa)

George Barnard is a potato farmer for the processing industry, based in Marble Hall, Limpopo. He was awarded for his innovative cultivation techniques, maximising relative humidity in a potato field in order to add one to two hours of growing time every day, with a concomitant increase in yield. He takes off two potato harvests a year from 200 to 300 hectares.

He farms in the Loskop Dam irrigation area and manages soil moisture through two systems of moisture probes. Multiple holes in the field collect water, attracting the root hairs of the potato plants, which maximises water use efficiency and reduces the electricity requirements of his irrigation programme. 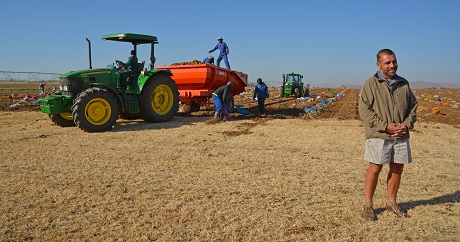 George Barnard on his farm near Marble Hall

Another unusual feature of his cultivation practices is the use of antibiotics, manufactured from the natural self-defence mechanism of mushrooms, which control soil-borne bacteria and fungi in a biological way. On his farm a potato planting is followed by maize (corn), drybeans or grass, before potatoes are replanted in the third year of the rotation system.

During his peak harvesting period of October and November the farm's mobile sorting unit has the capacity for 300 tonnes per day, down to 120 to 150 tonnes daily during the winter harvest. Potatoes are delivered directly to processors like Simba, McCains and Willards. 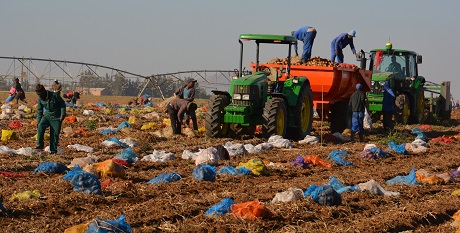 Harvesting potatoes on the farm

Ten years ago George, who hails from a farming family, was also named the Transvaalse Landbou-Unie Young Farmer of the Year.