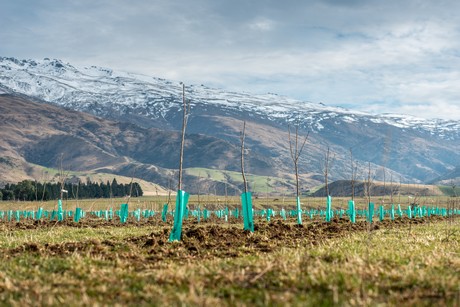 Mt Pisa Station landowners - the MacMillan family - were among the key investors who underwrote the planting as the development approaches the investment deadline of September 27.

Hortinvest project and orchard manager Ross Kirk said stage one planting of 7,500 trees had gone to plan. The second and largest planting is scheduled for winter 2020 with the final planting set for winter 2021. In total, 53,000 trees will be planted.

"Irrigation is now being installed so we can start piping water (from the Clutha River) to the newly planted trees," Mr. Kirk said.

"We're now also in the final stages of negotiations with several large investors looking to commit to Mt Pisa, with the project now more than 49 percent subscribed," he said.

The Mt Pisa development is one of two $15.5 million cherry developments in progress in the region. Stage one planting at the Lindis River development at Lindis Peaks Station is also complete.

"We're lucky to have the land which is ideal for cherry production - as well as access to the Clutha River for water. It's happened pretty quickly since we started talking about it and, by this time next year, the second planting will be complete," he said.

The development is a small parcel of the 4,600 hectares that Mt Pisa Station owns in the region.

Since releasing Mt Pisa to investors in January, demand had come from a range of investors including individuals, syndicates and iwi groups from throughout New Zealand and overseas, Mr. Kirk said.

With more than 30 years' experience in growing and marketing New Zealand cherries globally, Hortinvest had existing and developing markets for its cherries throughout Asia, Europe and the United States, he said.

When in production, the cherries will be harvested from December to February and take advantage of the growing seasonal and Chinese New Year market globally.

Mr. Kirk said Hortinvest's developments were in response to unprecedented global demand for New Zealand cherries which were perceived as a luxury product. Future orchard projects for other fruit lines were also on the agenda.