Jackfruit as well as other Exotics and Tropicals on display

Meeting face to face is one of the things that Yasmani Garcia likes about the Fresh Summit show.

“We like this show because we get our name out there and we get our logo in people’s heads. A lot of people see us in the Blue Book but once they see us there, it just helps get our name out,” says Yasmani Garcia of Sweet Seasons in Hidalgo, Texas. “But for me, I get to see my customers face to face and shake hands with them and maybe even grab some dinner which isn’t common in this industry because most sales are done over the phone or by email. You don’t see your customers a whole lot and maybe you don’t even know your customers face to face.”

At this year’s show, taking place in Anaheim, Ca. October 17-19, Sweet Seasons will have a number of its products on display. “We’ll show jackfruit which is one of our main items. But we’ll also show dragon fruit, Aloe Vera, guavas which we’re known for, avocados which we’ve gotten a lot into in the last two or three years and bell peppers,” says Garcia. 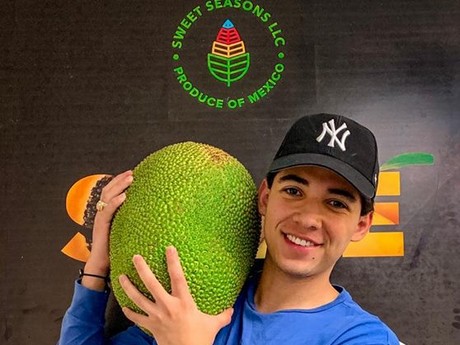 Sweet Seasons will show off its jackfruit at this year's Fresh Summit.

Challenging to harvest right now
Garcia notes that right now is a complicated time to source jackfruit, which comes from Nayarit, Mexico. “Where it comes from, right around now there’s heavy rain,” says Garcia. “In fact, they have two tropical storms around them right now and rain makes it harder to pick fruit.”

That said, supplies continue to make it in and Garcia is moving two, sometimes even three, loads a week. “We’re bringing in more this year,” says Garcia. “Last year we only brought in one load a week but since then we’ve just developed more business for it.”

Demand tends to largely come from the Asian community and Garcia adds that demand has also picked up for the fruit. Meanwhile pricing is average right now on jackfruit. “It’s sold by the pound and right now we’re at .45 cents,” he says. “But we’ve peaked at .55 and we’ve gone as low as .33 cents. So I’d say we’re about average right now. I think last year at this time, it was very similar pricing.”

And jackfruit will no doubt be a topic of discussion for Garcia at Fresh Summit, which he describes as a must-attend show. “We do attend other shows but this is the main one,” he says. “It’s the World Cup.”