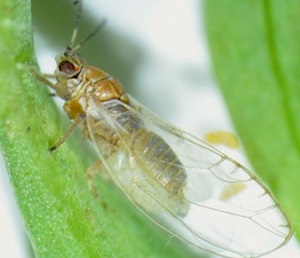 In Europe various psyllid species affect carrot production. Psyllids can transmit the phloem restricting bacterium Candidatus Liberibacter solanacearum (Lso), which causes severe losses to carrot and represents a threat to the potato industry. A rising concern is Lso transmission from carrot to potato and within potato, for this reason it is fundamental monitoring populations of psyllid species which could serve as vectors on both crops and understanding the epidemiology of Lso.

Scientists at ICA-CSIC of Madrid (Spain) with SASA of Edinburgh (UK) have used different sampling methods to survey populations of psyllid species in commercial carrot and potato fields in central and eastern mainland Spain from 2015 to 2017.

"Two psyllid species, Bactericera trigonica and Bactericera nigricornis were found on carrot and potato crops. In carrot fields the most abundant species was B. trigonica (occurring from crop emergence to harvest), whereas in potato crops the most abundant psyllid was B. nigricornis - the scientists explain - Depending on field location, the maximum psyllid populations occurred between June and October. Since B. nigricornis was found on both carrot and potato and is the only psyllid species able to feed and reproduce on both these crops in Europe, there is the potential risk of Lso transmission from carrot to potato. Our research in Spain contributes significantly to understanding population dynamics of psyllids in carrot and potato crops which is required for Lso pest risk analysis by National and Regional Plant Protection Organizations".