The lime market is settling back down following a period of extremely strong pricing.

“The lime market may have gotten too high too quick a few weeks ago,” says Steven Leal with S&J Distributing in Edinburg, Texas. “We had large numbers of fruit come in very high price points. It was summer fruit with off-season pricing so there was a disconnect.”

Lime prices were high for a number of reasons. “There were strong retail pulls but there was a significant loss on inbound fruit from Mexico. I’d estimate about 40-50 percent of those loads were not US #1 combo grade,” says Leal. Instead, he notes the market was being sent a great amount of inferior fruit—#1.5s and #2s. “And on top of that, the ones that were graded did not have a long shelf life,” says Leal. “There was a lot of shrinkage so even though the inbounds were high, there were these losses occurring.”

Lack of rain
Weather also played a role in the market spike. “There are some drought issues in Mexico,” says Leal. “It’s affecting their bloom and sizing. The heat, coupled with the quality issues, caused a rapid increase in the market about four weeks ago. It went from $18 market and then it shot up. Just a few weeks ago we were hovering in the $40s for 200s and larger and in the $30s for 230s.” 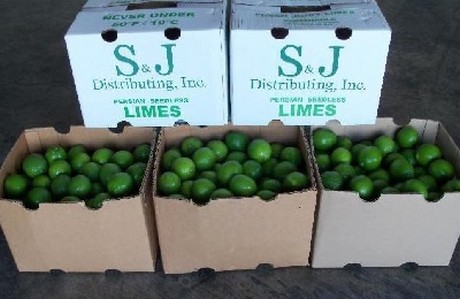 However things are moving back to a more normal lime market for this time of year. “Inbound supplies are slowing up a bit. There is a lot of hesitation in regards to Mexican growers sending product partly because we’re relaying to them that it’s a declining market for limes now,” says Leal.

Meanwhile the quality of limes is improving and the shrinkage estimates on the fruit are also reducing. Yet at the same time, demand is slower as well. “It’s a buyer’s market because shrinkage isn’t as bad and the fruit is coming in at a steady pace,” says Leal. “Historically right now demand is on the lower side. After Labor Day, we usually see weak demand on limes. Sometimes it stops and stays steady in the middle of September and sometimes it stays depressed until the middle of October. We’re definitely going to see a declining market for the next few weeks.”

“We’ll see things come off for the next few weeks because the price points are above where they should be,” says Leal. “The market needs to correct itself. There are fewer shipments coming in this week but there needed to be. I think there are a few more weeks of a steady decline--I would have said drastic decline if the volume had kept up at high levels, but they’re not.”