Kaki purchases in Spain made without contractually-fixed prices

At the beginning of the current kaki campaign, LA UNIÓ de Llauradors has observed a lack of purchase operations at origin. Moreover, the majority are being carried out without contractually-fixed prices, as already denounced to the Information and Food Control Agency (AICA). This institution, dependent on the Ministry of Agriculture, has already announced that it will carry out the appropriate checks to detect possible breaches.

The agrarian organization said in a letter sent to the AICA that various companies are supposedly behind this situation, purchasing kakis without the mediation of a contract and without a fixed price. 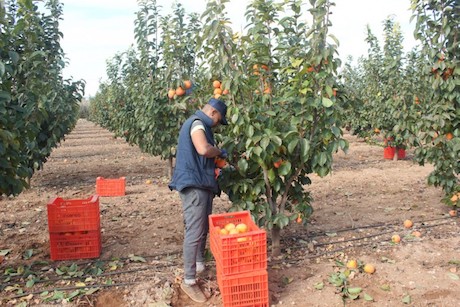 Given this, the organization is urging the AICA to start the controls and inspections required to verify the existence of written contracts and, if necessary, the fulfillment of their content. The organization believes that these actions could be allegedly violating Law 12/2013, of August 2, on measures to improve the functioning of the food chain.

Harvest back to normal
As long as the weather does not prevent it, the kaki production is likely to go back to normal levels, following the catastrophic results recorded last season. LA UNIÓ expects some 400 million kilos, which is a notable increase compared to the previous campaign, when there was an abnormally low production. However, that volume is just about 3% greater than in 2017, when it stood at 385 million kilos.

The sector agrees that the fruit is of very good quality and has an ideal size, so there shouldn't be too many discards.

There is also consensus about the increase in the demand for the fruit in both the state and the European markets, and even in other countries, such as China, India, Canada or the US. It should be noted that the promotional campaigns carried out by the PDO Kaki de la Ribera, funded with money contributed by the producers themselves, continue to work rather well.

LA UNIÓ believes that with an increase in consumption and normal production volumes, it would be logical to think that the price to be paid to the grower would be ​​higher than at least 40 cents per kilo. However, the prices published by the Ministry of Agriculture actually place them somewhere between the 24 and 34 cents per kilo, which is 25% less than in the same week of the previous campaign.

The head of the kaki sector, Eduard Esparza, believes that the current conditions should ensure the development of a much better campaign, compared to the previous one. "I don't understand how, often, purchases become situations in which growers are forced to choose between a poor price or nothing, causing them to become nervous."

The head of the kaki department at LA UNIÓ recommends not caving in and giving away the fruit. "We have treatments to delay the harvest that can give us a greater room for maneuver," he says, stressing that "any attempt to purchase fruit without a contract should be reported. It is important to unmask those businesses that are not only behaving illegally, but also damaging the reputation of the entire sector, which generally does things well. Only by losing our fear, being brave and standing together can we make the viability of kakis a reality in the future, instead of a memory of the past,” says Esparza.