“Our onions were some of the best Europe received this season”

The past export season has been the best in a good number of years for the onion producers of the Western Cape, and Môrester Landgoed in the Koue Bokkeveld, outside Ceres, hopes that this is a trend that’s set to continue.

“Our onions arrived very well in the UK and Europe,” says Charl van der Merwe, marketing manager at Môrester, “In fact, I think the quality of our onions was some of the best that Europe received among its exports from Egypt, New Zealand and Spain.”

“We hope it opens doors for us,” he continues, “For a few years onion exports flattened out as European buyers rather looked to New Zealand for onions but last year it picked up considerably, and I think receivers in Europe have started realising that they need to look at other regions and other clients as well.”

“We received many overseas enquiries for our onions and if we’d had more, we would’ve been able to sell more.” 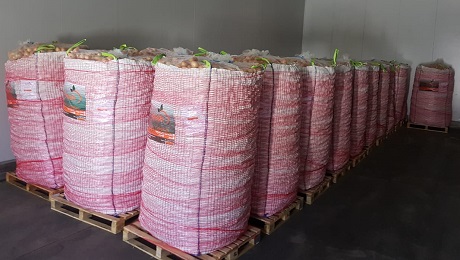 Their long day-length and dry summer climate, especially from December to February when the bulbs are maturing and drying out, as well as their altitude, account for the exceptional quality of their onions, he says. At night, temperatures cool down, promoting sugar development. All of the planting for the new season has been done; the harvest runs from late December or early January and February. 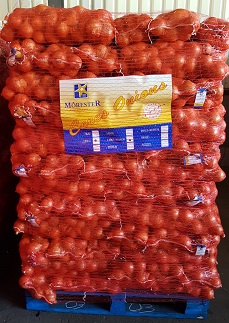 Their export window is January until mid-March, a conservative period with shelf life in mind, but this past export season they went well past that period, with no ill effect.

They supply the domestic market with onions into August (right: 10kg bags for the local market).

Despite the past season’s success with European exports, he doesn’t think that any onion producers in the Koue Bokkeveld are expanding their area under onion – their own is around 240ha, of which 3ha is red onions, the rest brown – because water is the big limiting factor. Fortunately, it’s been a good winter, with dry conditions during the planting season, and he expects another good quality year on onions.

Planting of onion seedlings by hand
The Koue Bokkeveld could be the only onion producing region in the world, certainly in South Africa, that plants its fields with onion seedlings, and by hand.

“At our onion nursery we produce our own seedlings, using seeds from a number of different companies, depending on their cultivars for the early, mid and late time slots. The time of the year that we plant onions it’s typically cold and wet and windy, with a risk that seeds could be blown away or not germinate, so we need to plant onion seedlings that are already a bit tougher.”

The company also grows apples and pears (marketed by Corefruit) and carrots, as well as supplying many Western and Southern Cape strawberry growers with plants from their strawberry nursery.