Nova Scotia apple growers are still gauging the damage of Hurricane Dorian following the tail end of the storm touching down in the region more than a week ago.

“It’s just kind of a mess right now,” says Brian Boates, an organic pear and apple grower with Boates Farm in Cambridge, N.S. “It really did a lot of damage. It was wide. The first half of the day, the wind blew out of the east and the second half, it was dead hard out of the west.”

Boates estimates he’s lost 20-50 percent of his crop depending on the variety. “Our high-value variety, Honeycrisp, was blown off the worst. I also have quite a few Bosc pears, another high-value crop, with markings. The pears grow in clusters and the clusters were banging around.” 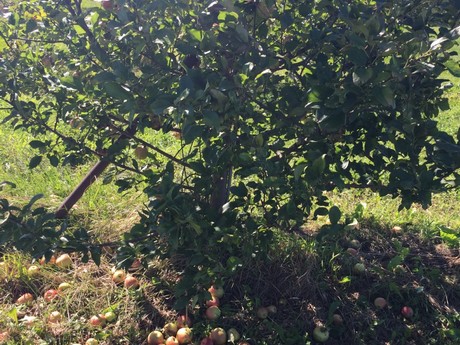 Boates notes that once the remaining fruit is picked, it will have to be scrutinized closely to determine grade, but adds that it’s likely a bigger portion will go to a lower grade of fruit. “Compared to last year though when we lost 90 percent of our crop to spring frost, we’re a lot better off. We have something to sell and work with,” says Boates.

“I see a lot of people picking up dropped fruit and the juice plant is open and they’re taking the apples,” says Elderkin. “I suspect you’re looking at a high percentage of the crop. It’s salvageable but at a fraction of the value of the fresh product.” 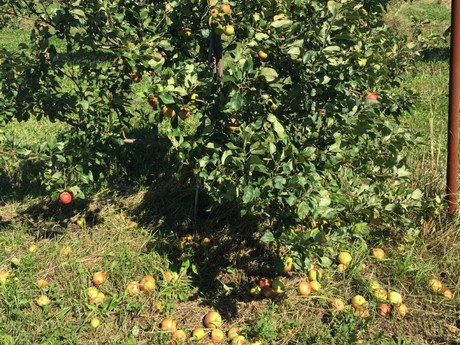 Future concerns
While this is the short-term effect of the storm, Elderkin points to a larger more long-term issue that could lie ahead. “Some farmers had new plantings that were planted with support systems and the trees actually went down. A lot of the trees are either on the ground, which is very difficult to get them back up and get the trellis back in. Or they’ve broken off,” he says. “It doesn’t affect us this year but will affect us the next number of years because there’s a very high investment in these new systems. Basically they’re gone.”

He adds that the past four days have been spent standing up some of those knocked down trees and replanting them in the now exposed holes. “The wind just whipped the trees back and forth so we’re standing those trees back up and filling in those holes around the tree,” he says.

Already late season
With the crop already running late this year thanks to a wet fall, winter and spring, growers are saying there wasn’t much they could have done to prepare for Dorian.

“Stuff wasn’t ready to pick because everything was late,” says Boates, adding that right now he’d normally be harvesting McIntosh apples and instead will potentially start this weekend or next Monday. “So that gives us some time to get some clean up done,” he says.