Supermarket chain Countdown says its biggest selling potato is still the one with the least flavor – white washed potatoes – providing an opportunity for growers. Countdown business manager vegetables Grant Robinson said potatoes were a pantry staple, with price still consumers’ number one consideration. Customers also preferred that their potatoes were New Zealand-grown, he told the Potatoes NZ conference in Christchurch. 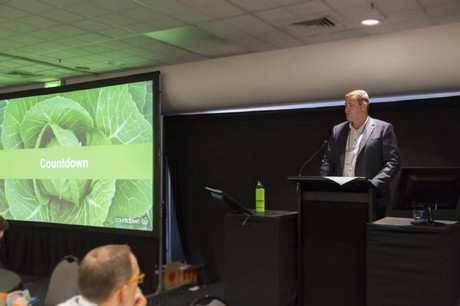 Countdown has 180 supermarkets throughout New Zealand serving three million customers a week and stocking more than 20,000 product lines. For produce, it has a national buying team of 23 and 20 trainers teaching staff in-store. Eighty-five percent of produce was bought directly from growers to improve freshness and communication.

The company had a focus on the environment, as research showed that 70 percent of respondents would stop buying from companies if they were harming the environment. “So it is incredibly important to our customers.”

A third of its media enquires now related to plastics and packaging. In response, Countdown had removed 160 tons of plastic through reducing gauges of plastic, or removing it completely. It had also removed 70t of cardboard and planned to remove a further 700t in the next 12 months.

However, a key point not fully understood by consumers was that there can be a trade-off between food waste and packaging, Grant Robinson said.

Packaged lettuce lasts twice as long as unpackaged lettuce – about seven days shelf life compared with three days for unpackaged. The average household purchased 180 kilograms of packaging a year, of which 67 percent was recycled or recovered, creating about 2.5 tons of carbon dioxide (CO2) emissions.

This compares with 262kg of food waste created annually by the average household, of which 20 percent was composted, generating 39 tons of CO2 emissions. “So there are two parts of the equation, which we need to be aware of and keep the balance right,” Grant Robinson said.

Supermarkets dominate fresh potato sales, worth $115m. Countdown had a 36 percent market share, while independents sold 12 percent of fresh potatoes. In the last 12 months, sales were flat or slightly down, with a deflation around 8 percent. “So customers are either buying a smaller bag, or a lower cost bag.”

Of the potatoes sold, 24 percent are loose and 12 percent brushed, with 21 percent of sales discounted produce. Sales of red potatoes are only 0.07 percent and decreasing. Growth categories are value/discount, seasonal gourmet and premium washed.

Customers that buy loose potatoes prefer to shop for all produce loose. These customers tend to be a single person household, or live in an apartment, are environmentally focused and often buy potatoes as part of a planned meal.

Pre-packaged potatoes resonated with budget conscious customers as these were fixed price. People who had chosen not to purchase potatoes in the last three months did so because these were perceived as less healthy than other vegetables, they were following a specific diet, or growing their own.