Fifteen years ago a Cameroonian postgraduate commerce student at the University of Cape Town was looking, in vain, for plantain. Later Joëlle Kana started working in Johannesburg as a researcher at a global management consultancy company where, once in a blue moon, she would receive a message: someone has driven down from Malawi or Tanzania, a distance of 3,000km or more, with a load of plantain (cooking banana).

“Then you would drop everything you’re doing and drive to Pretoria and the plantain would cost a fortune and be of poor quality! So I started asking around, I went to the agriculture department who said that they had tried before to make contact with several West African countries on import permits for plantain, but they received no response from them,” she recounts. (Her ardency for the plantain does not extend to bananas though.) 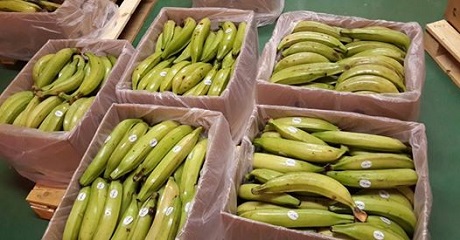 Boxes of sorted and ripened plantain (photos: Food From Home)

At the same time, Joëlle noticed a marked increase in the availability of plantain in France, where she has family. “In 1990 you could find no plantain, no matter how far you looked, but when I visited again in 2004 it was everywhere, it was at every small corner shop.”

It turns out that importers had stopped looking to source plantain from Africa and instead get it from South America. In West Africa it is a staple crop, much loved in many countries, but also still to a large degree home-cultivated.

Sourcing plantain year-round from Ecuador
She started looking for importers’ addresses, which led her to European importers who, when she outlined her idea to import plantain into South Africa, had a good laugh and eventually pointed her in the direction of her current supplier in Ecuador.

It took several years for the permit to be issued and in December 2015 she took receipt of Food From Home's first container of plantain, coming from Ecuador via Europe .

“I had to take a full container – and I didn’t even know what a 40ft container looks like! If I had any idea of how much plantain that was, perhaps I wouldn’t have done it!” 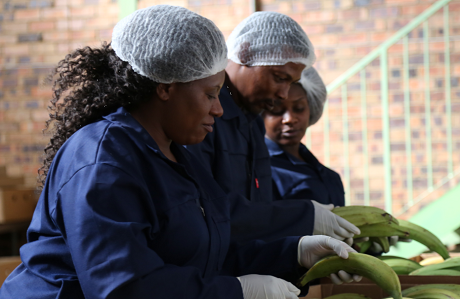 Along with the Food From Home team she started calling, finding customers all over, many in the informal sector, some retail groups (Food Lovers Market and some Spars), a few Nigerian restaurants. They found interest not only among the West African expat community in South Africa, but also among Latinos and south Indians. Slowly Afro-cuisine and the plantain is being discovered by more mainstream restaurants.

Food From Home advertises through social media (Facebook and Instagram) and the company’s website features a GoogleMaps location tool showing where Food From Home plantain can be found all over South Africa.

“It took time to understand and develop a mastery of plantain”
There was zero institutional knowledge of plantain storage and consumption in South Africa when Food From Home started. One of the most common pieces of advice Joëlle had to give South African clients, is: don’t put it in the fridge and don’t discard it when it gets dark; some people, like Ivorians, prefer it sweeter. 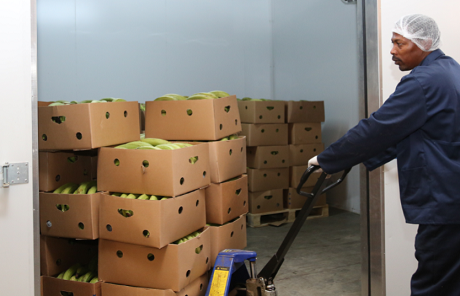 Food From Home started operating out of Kyalami, Johannesburg, until they ran out of room. Now their ripening facility is in City Deep, close to the large Johannesburg Municipal Market. After ripening, the plantain has a shelf life of over a week.

Because of the perishable nature of the product, many Food From Home clients prefer to collect small quantities weekly or even daily from their warehouse in the south of Johannesburg, rather than stocking big quantities. Some of their clients (mostly restaurants) based in the Johannesburg city centre come to them to sort through the fruit and make their own selection, often at a discount.

Like most vegetables, plantain is seasonal and although scarce, smaller and much more expensive to source in low season (June to September), Food From Home sources fresh plantain throughout the year. “We try our best to ensure uninterrupted supply of fresh plantain in South Africa, especially during festive seasons when order quantities increase," says Joëlle.

Delays and stock shortages do occur, sometimes at peak demand periods such as Christmas or Easter, mostly due to delays at the ports at times caused by strong winds or port congestion. 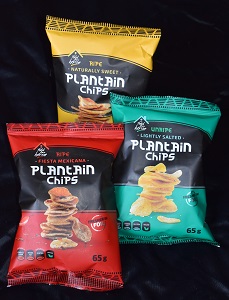 Once, while they were still getting to grips with the plantain’s particular postharvest practices, in an attempt to rescue a load of plantains, they took it to a local potato chip manufacturer who successfully made it into chips. However, the cost and logistics of local chip manufacturing is prohibitively high, but in this way Joëlle stumbled onto a new offering: plantain chips.

In June this year Food From Home launched their line of plantain chips. The gluten-free, vegan chip is already sold through Food Lovers Market stores in the coastal regions, selected Spars stores across the country with Dischem, prominent pharmacy and health food chain, to follow.

It is packaged into the Food From Home brand. “If you’re bringing in something completely new, creating a brandnew market, you might as well also build the brand yourself,” she says.