In addition to domestic offers, the Eastern European Stanley was readily available as well. These were cheaper than the German fruits and therefore usually generated a friendly demand. Spanish, Italian and French lots completed the range of goods in smaller quantities. 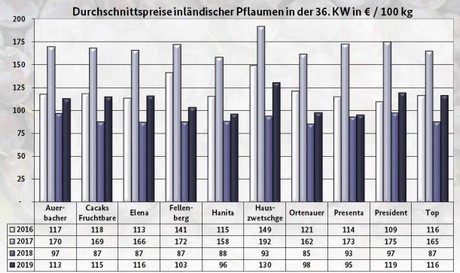 Overall, demand could be met without difficulty. Meanwhile, sales were not satisfying everywhere. Hamburg and Cologne marketers had to lower their prices in order to improve sales options. Only in Munich did the Bosnian Stanley become more expensive as a result of limited deliveries. There Polish Top five met only a limited demand due to what was really an unsatisfactory taste.

Apples
Due to increased supplies, prices could rarely hold at their previous levels. Promotions accelerated the sales at certain points.

Pears
Italy mostly provided Abate Fetel, Santa Maria and Williams Christ. The quality was quite good in most cases. Demand was often met, so prices did not change too much.

Table grapes
Sales of table grapes were usually quite good. However, the ever increasing supply often led to lowering prices. In Cologne, however, Greek Thompson Seedless saw their prices go up.

Peaches and nectarines
Spain and Italy dominated the trade. Availability was obviously limited. Nevertheless, in general the demand was satisfied without much difficulty. The quality of the goods only rarely was less than excellent.

Plums
Domestic goods determined the market, with numerous varieties: Primarily there were Hauszwetschgen, Top, Cacaks Fruchtbare and Auerbacher. Overall, demand could be met without any real difficulty. Meanwhile it has to be said that sales were not satisfying everywhere.

Lemons
South Africa rose in importance just as Spain had to give some ground here. As a result of the cooler weather, the sales improved. However, this did not significantly affect the prices.

Bananas
In some places, sales definitively picked up. This was partly due to the weather and partly to the end of the holidays in the south of Germany. In other places, sales slowed down so much that significant price reductions were necessary to avoid creating stocks.

Cauliflower
Germany dominated the market, more so than Belgium. The demand could be met without any effort. Quality was mostly good.

Lettuce
With regard to lettuce, only domestic and Belgian goods were available. In the case of ongoing sales within a regular and continuous framework, prices mostly remained stable.

Cucumbers
Dutch, Belgian and local deliveries formed basis of the cucumber assortment. The supply was somewhat reduced, but was sufficient to meet the demand. Demand shrank a bit as well.

Tomatoes
Belgian and Dutch shipments put their mark on the available range of goods. Although availability decreased, there was still too much produce available for the slow demand.

Sweet peppers
The Netherlands dominated the scene here, together with Poland. In many places, the high prices of week 35 dropped in the course of the week.