Variety introduced in 2018, now available from selected retailers and wholesalers

The red-pear QTee pear is now available from selected retailers and wholesalers in Switzerland. As a strain from Swiss cultivation, it heralds the Swiss pear season.

Agrolog.ch ag
Sales and marketing of QTee are carried out by agrolog.ch ag, an agro-logistics platform with nationwide coverage. Its core business is the marketing and logistics of dessert fruit and table potatoes. The company was founded in 2007 by the companies Tobi Seeobst AG, GEISER agro.com ag and vs.fruits sa. 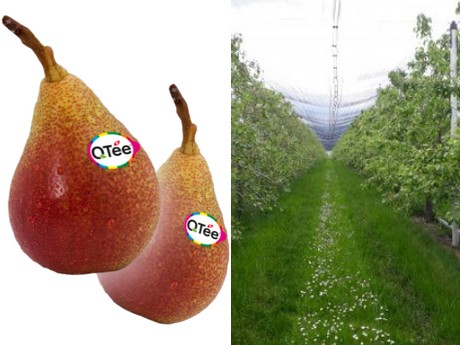 The QTee pear is cultivated and marketed within Switzerland. Picture: agrolog.ch ag

Features of the QTee
The unique, aromatic taste, the juiciness and the versatility are convincing to the consumers. QTee is ideal for direct consumption or for use in cooking, baking or preserving. its beautiful look is very appealing as well. The color combination of delicate, pointed red on fresh green sets accents. It meets exactly the consumer demand for red-cheeked pears that has been in existence for several years.

Market launch in Switzerland
In 2018, the variety was introduced to Switzerland with great success. And since the first marketing year, it has enjoyed a great deal of demand. Without exception Swiss QTee pears are marketed in Switzerland. The cultivation areas are located in the cantons of St. Gallen, Aargau, Bern, Vaud, Geneva and Valais. The areas already planted are now productive and guarantee market-relevant quantities.

Breeding
The pear was developed in 1987 in Norway. It is a cross between the varieties Williams and Colorée de Juillet (Colorful Julian Pear). The variety name of the cross is Celina. The variety is marketed under licensed brand QTee. In addition to Switzerland, QTee is also cultivated and marketed in Belgium, France, Spain, Italy, Austria, Slovakia, Africa and Australia.