An excess of nitrogen (N) is used in agriculture with a negative impact on the environment and food quality. One approach to circumvent this is to select crops with a stable or even increased productivity under limited N. 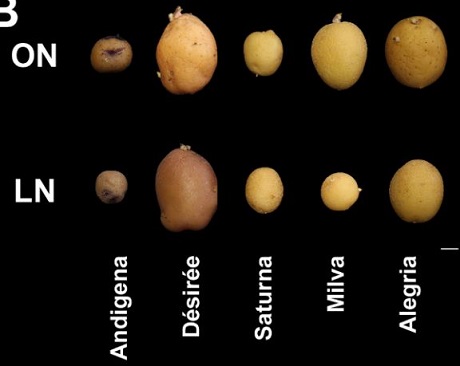 "We used wild Andigena and four potato cultivars Désirée, Saturna, Milva and Alegria, commercially available in Europe as table potatoes, to examine the effect of limited N (LN) on tuber yield and quality traits important for the food processing industry, such as enzymatic discoloration and tuber sprouting", the scientists explain.

Growth on limited N resulted in less tubers with a reduced weight except for Andigena. Tubers from low N-grown plants contained more starch, less sucrose and were delayed in tuber sprouting. Some of the trait differences can be explained by changes in hormone levels between cultivars and N conditions.

"In general, Saturna and Alegria performed better under limited N making them excellent breeding candidates - the scientists conclude - Our results suggest that wild species more flexibly adapt to limited N, a trait lost in commercial potatoes. For future breeding, the potato industry would therefore benefit from going back to the rich trait potential of the wild potato species.

Furthermore, we found that growth on limited N condition did not change important internal quality traits of Saturna, such as starch, sugar and vitamin C levels. Also the LN tubers of Alegria sprouted very late compared with optimal N (ON) ones which makes them perfect for long-term storage. Using these N insensitive cultivars and depending on the trait interest of the breeder, new breeding opportunities might be taken account both to reduce the use of nitrate and to produce high quality potatoes by using those cultivars as tools to develop suitable markers."