For about 10 days, Hurricane Dorian has been making headlines in the news and it continues to cause damage. It lost its hurricane-force winds and was considered a post-tropical cyclone when it made landfall in Nova Scotia Saturday night. In addition to Nova Scotia, the storm made significant impact on Prince Edward Island and New Brunswick as it blew through with winds up to 90 mph. According to Nova Scotia Power, more than 474,000 customers in these three provinces were without power. 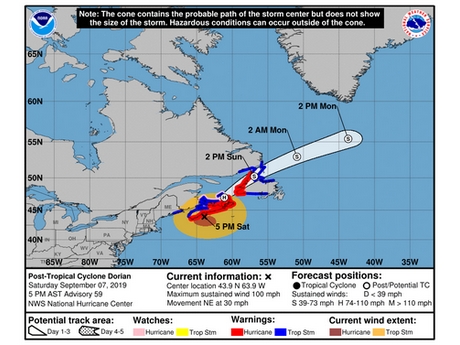 “This storm seemed to have a very wide path of destruction,” says Dwayne Coffin with Vanco Farms out of Prince Edward Island. “For the most part, the storm has caused widespread power outages and many fallen trees on PEI, along with severe coastal erosion caused by tidal surges along our shores.” On Sunday night, about 40 to 50 percent of the Island was still in the dark. “Some areas are going on 28 hours without power and schools are canceled for Monday,” Coffin shared. The amount of rainfall was very widespread. Charlottetown, where Vanco Farms is based, got about 48 mm. while Kinkora got about 130 mm., Tignish 120 mm. and Souris about 60-70 mm.

Concern for storage potatoes
“It is still very early to determine the full extent of the damage of Hurricane Dorian,” Coffin said. It depends on the amount of rainfall the different areas received, but low spots or any areas with water pooling would be of concern since those potatoes are most likely going into long-term storage. “Less than 1 percent of the PEI potato crop has been harvested and most farms, including us, haven’t even started. Most of the harvest is scheduled to start this week into early next week.”

On a positive note, most of PEI was extremely dry until the last week of August, so the ground could certainly absorb some water. However, too much water will have impact on the potato crop, and it will force growers to wait for fields to dry out before they can harvest or go around wet areas. 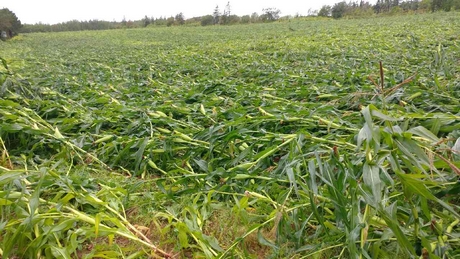 Other crops that have been damaged include corn and soybeans. “In some cases, fields are completely flattened, which will make it extremely hard to harvest,” Coffin mentioned.