"It's becoming a regular tropical fruit offering in North America"

Suppliers of rambutan in the United States are noticing an increase in demand for the exotic fruit. They say that rambutan is becoming a regular feature in the tropical sections of the produce department in retail stores.

"Rambutan are becoming a regular tropical fruit offering in North America," said Amy Nguyen of Oregon-based Dragonberry Produce. "Consumers are able to purchase them in mainstream stores as well as specialty stores across the region. They are typically eaten fresh by peeling off the outer skin and eating the juicy white flesh that surrounds the small stone in the center. They are also a great addition to drinks and other dishes. Rambutan have many nutritional benefits and are generally sweet."

Year-round availability
One of the reasons that rambutan are more commonly seen in stores now is because they are available year-round. Currently, the majority of supply comes from Guatemala, which is the dominant source during the summer months. At other times of the year, suppliers like Dragonberry Produce import rambutan from regions such as Vietnam. 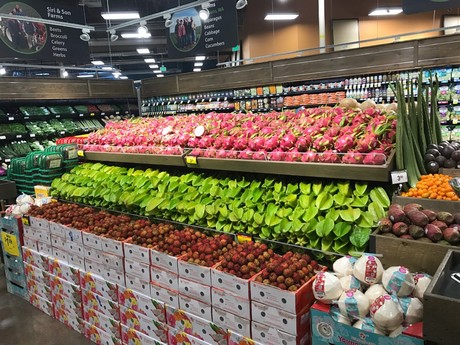 "The Guatemala season is on now and is expected to continue until November or December," Nguyen explained. "We import them from Vietnam during the period of December to April. Higher freight and treatment costs means we generally don't import rambutan from Vietnam when Guatemala is in season."

Nguyen said Dragonberry Produce sells rambutan in 2.5kg (5lb) boxes. "From our Northwest base, we are able to conduct trade across the United States, and therefore ship rambutan nationwide." As she noted, prices are relatively low at this time of year.

Other tropical fruit
Along with rambutan, Dragonberry Produce supplies many unique varieties of fruits and vegetables, including 20th Century Japanese pears, Organic Hidden Rose apples, and an assortment of green vegetables. One of the main offerings is dragon fruit, which the company sources year round from Mexico, Guatemala and Vietnam. Nguyen says it's a great opportunity to supply consumers with more exotic produce items.

"We constantly have something new in season, although many items such as our dragon fruit are available year-round," she shared. "It's wonderful that consumers are now more receptive of tropical fruit and it's a good thing that there are now more varieties available in stores than ever before."