As the domestic apple season gets going in North America, growers are saying that the crops in Pennsylvania, New York State and Michigan look good.

“We’ve just started harvesting our earliest varieties like Gingergold and Paulared,” says Brett Baker of United Apple Sales of Lyndonville, NY, who notes that Western New York started between five and seven days later than normal on some of its core varieties including McIntosh, Royal Gala and Empire apples. “We had a lot of rain and a very cool wet spring. We were glad we weren’t at risk for a freeze but we got behind.”

Meanwhile Pennsylvania growers got a slightly earlier start by about three to four days. “We just started the harvest and they’re picking Royal Galas, Honeycrisp and McIntosh. The Gingergolds are picked, we haven’t started Red Delicious yet and we probably won’t start Golden Delicious for a couple of weeks,” says Sandy Cohen of Camp Hill, Pa.-based Cohen Produce Marketing. “Supplies look very good. The Pennsylvania crop has about as much as they did last year.”

And over in Michigan, it too has started with is early varieties of Paulareds and Gingergolds. McIntosh has also just started and this week it’s built volume on its Royal Galas. “We also started shipping SweeTango this week. We have the nicest crop of SweeTango since the program started eight years ago,” says Scott Swindeman of Sparta, MI-based, Applewood Fresh Growers, LLC. “Sizing seems to be average and the color is fantastic. It’s been cooling off at night and we’ve had a lot of sunshine.” 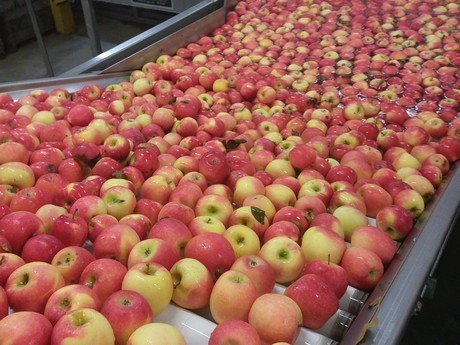 Apples sizing up
Cohen adds that apple sizing is slightly bigger than last year and the quality is also good. “There was plenty of water over the summer so the quality of this crop looks really, really good,” says Cohen.

The sizing also looks good in New York state. “We’ve not had an overly hot summer and we’ve had good precipitation so we’re anticipating very good size. And our volume could grow depending on how much sizing we get here in these last few weeks,” says Baker. “I don’t feel that there are more apples on the tree but the size is so much better that we’re projecting that we’re going to fill more bushels.”

In Michigan, Swindeman says volume is up about 10 percent on the crop but also flags a size factor. “The sizing, especially in Royal Gala, will be up from last year,” he says, adding that Honeycrisp sizing is also up from last year but that last year’s sizing was unusually small. “The overall crop of Honeycrisp unfortunately in Michigan is down. But the other varieties are either the same or up lately—Galas are up a bit more.” 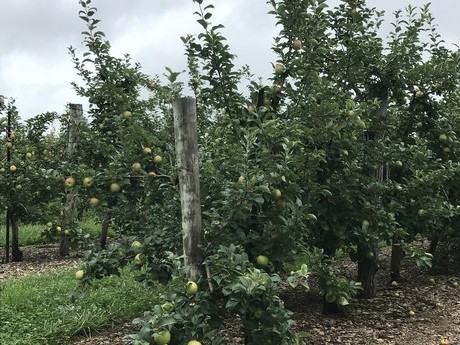 Demand to get stronger?
Not surprisingly, demand looks pretty strong for apples right now. “Right now we’re able to hit some of our local and niche markets,” says Baker. “And historically we see a pick up in demand after the kids get back to school and schools here just started.”

Cohen also notes a strong push for local demand for apples. “All the retailers want local fruit. The West is pretty much cleaned out except for Red Delicious and there might be a handful of Honeycrisp out there too,” he says.

Similar prices to 2018…for now
For now, pricing in New York is looking similar to last year. “As we get into more of the main varieties such as the Royal Galas, Fujis, Honeycrisp, Golden Delicious, we’ll start to see whether or not that helps increase the pricing on the larger sizes that we have this year,” says Baker.

Cohen also notes that pricing is similar to last year. “It’s relatively strong and strong on Honeycrisp, though I’m not sure how long they’ll stay that way,” he adds. 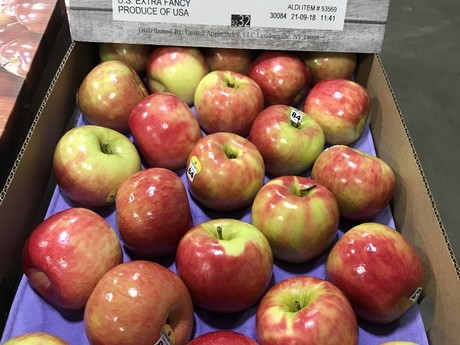 Looking ahead
Baker says its Gingergolds should be picked by early next week and is projecting to pick McIntosh and Royal Galas the week of October 9th. “The Honeycrisp are down a little bit from last year but last year we had a very heavy crop and sizing was down,” he says. “This year Honeycrisp is sizing up significantly but it all depends on what we get in terms of temperatures and rainfalls.” He anticipates following picking its late varieties including the Pink Lady, Fujis and EverCrisp, harvest should be wrapped by November 10-12.

Cohen says its picking until early November and the last varieties, including Cripps Pink, won’t come off until late October or early November.

And in Michigan, crops should be done with harvest October 25-November 1st.

Trade concerns
One concern that does loom this fall for growers and shippers is the state of exporting out of the U.S. “This is a daily worry. The crop is projected to be up nationally and having more fruit and less export markets open always creates a challenge. So the trade barriers that we have right now are very concerning,” says Baker.

And the state of exporting continues to shift. “Five years ago, 90 percent of our export went to the European Union. With the different restrictions that they have there now on the MRLs—material residue level—we’ve almost completely stopped shipping to the EU and we’re shipping heavier now to the Middle East and Southeast Asia,” says Baker. “But those markets also are more advantageous to other supplying regions in the world as well.”