The first onions of the Ontario season have just started shipping. The initial harvest is of transplant onions, while seeded onions are yet to be harvested. Growers say that both harvests have been delayed by two weeks because of the variable weather conditions in Ontario, which began in the spring.

"We typically begin harvesting transplant onions at the start of August, with seeded starting at the end of August," said Quinton Woods of Gwillimdale Farms. "However, this year we started on the transplants two weeks ago, while it will be another 7 - 10 days before we start harvesting seeded onions. Ontario experienced a cold, wet spring, then it was hot and dry for a while during summer. Now it is cool again."

Woods noted that planting was disrupted and resulted in some variability between fields. "This depended on how wet the fields were when planting and will be a big factor in the upcoming season," he said.

Quality is good
Woods added that the variability will be in the form of yield, rather than quality, saying that the condition of the onions is very good. Overall, despite the delayed harvest and potential yield challenges, growers are satisfied with the crop. 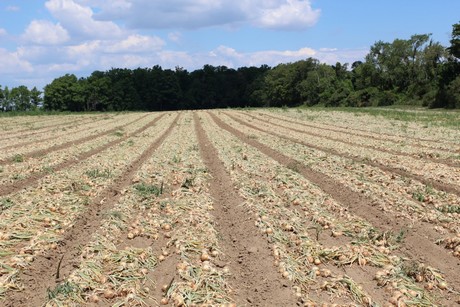 "What we are seeing is a good crop, with quality and condition remaining excellent," Woods said. Producers like Gwillimdale Farms first top the onions before digging them back into the soil to cure. They then return one week later to harvest the cured onions and send them off to the packing house.

The company primarily produces yellow cooking onions as well as some red, with options for retail and bulk packs. "Retail is our biggest avenue and so we offer 2lb and 5lb consumer packs, as well as 25lb and 50lb bulk bags," Woods shared. "Our distribution focuses mainly on eastern Canada and the Northeast United States, but we also send some onions down to Florida and the Southeast."

Plenty of supply
As it stands now, the market is well stocked with onions from various regions in North America. The Northwest season was also delayed due to weather concerns, but since the start of its season, volume has been strong. Woods noted that this is in contrast to last season. "There is plentiful supply coming out of the Northwest right now," he said. "There is no shortage out of any region which has resulted in heavy pressure on the market." 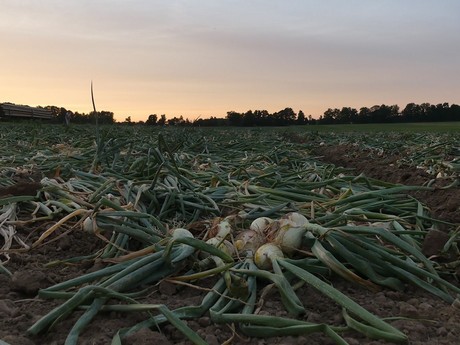 The thought is that growers wanted to take advantage of last season's good prices when the market was tight. According to Woods, more acreage was planted which has resulted in an increase in volume. But there is hope that the market will turn once the storage crop starts. "The heavy volume is mainly on new crop onions, as they need to find a home," he observed. "We hope it turns around when we get into the storage crop."

Big expansion
Gwillimdale Farms has been undertaking significant expansion projects, with the recent opening of an expanded refrigerated storage facility. Woods said the expanded storage will allow for another 7 million pounds of late season storage onions and is now operational. "We imported much of the cooling and storage equipment from France from Klim'top, and we are very excited to put product into it."

Additionally, Gwillimdale Farms is currently expanding its packaging facility, which Woods explained will triple the current capacity. "We are in the midst of a big expansion project with our new onion packing facility. It is due to open in January 2020 and will be more efficient, and have more and better equipment than our current facility."