Category 1 Hurricane Dorian made landfall over Cape Hatteras, North Carolina at 8:35 am EST this morning, bringing with it heavy rain and winds of over 90 mph. Storm surges appear to be the biggest threat to homes and lives after it already decimated The Bahamas earlier this week and caused the deaths of at least 30 people.

South Carolina yesterday felt the Hurricane's impact, with hundreds of thousands without power and many forced to evacuate. Flooding in coastal towns like Myrtle Beach and Charleston has been reported and sustained winds along coastal areas were in the order of 50 - 70 mph. Peach season has ended in South Carolina, but some vegetable crops are in season. It's unclear whether there has been any damage to these crops.

North Carolina growers waiting
In North Carolina, growers have been preparing since last weekend for possible impacts from Dorian. The corn harvest is still in full swing and growers are concerned about potential losses there. Similarly, the sweet potato harvest has just commenced and given the devastation from two hurricanes last year, sweet potato growers are hoping that this storm will not have the same impact as last year.

"We are simply going to see how things go," said Rhonda Matthews of Ham Produce in Snow Hill, North Carolina. "It started raining at 7am Thursday morning and has not stopped. There is the potential for flooding but we really won't know until the weekend. We are hoping that it will pass through uneventfully."

She added that it's something that growers in North Carolina are used to, and have therefore prepared as much as they can. "We try and harvest as much as possible, going out into the field, picking them and returning to our facility." 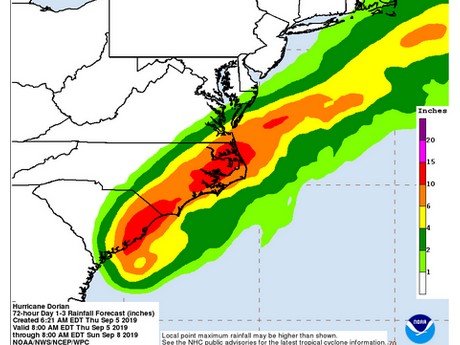 Weight limits have temporarily been suspended as part of the declared emergency in both North and South Carolina. Therefore, growers have been harvesting as much corn and sweet potatoes as they can. “This is our third hurricane in a row, so we know the importance of getting the crop out,” said Lin Vick of Vick Family Farms. “We have witnessed the devastating effects if product is left in the field, so all growers put as much effort in as possible to harvest as much as we can."

Rain could be beneficial
Some areas of North Carolina are expecting in excess of 10 inches of rain. For the most part, this will be confined to coastal areas, but a wider region is looking to receive at least 5 inches. The state has been dry over the summer, so growers like Vick suggest that some amount of rain could be beneficial to the sweet potato crop.

“We can stand a little bit of rain, but not too much," he said. "We don’t need any wind as it would blow the corn down. We have been dry, and it is early in the season, so the potatoes can stand a little more rain than a little bit later in the season. A little bit of rain wouldn’t hurt things at all for the sweet potatoes. But if we get too much rain, then we won't know until we harvest them. We saw last year with Florence that too much rain can ruin a crop.”

Hurricane Dorian is expected to depart the US coast by Friday night and head northeast into the Atlantic. Growers in the Maritime provinces of Canada could feel post-tropical storm weather during the weekend.