At the end of July, Fruvo in Krabbendijke, planted 20,000 Morgana trees. "July is actually quite late to be planting fruit trees, but they're doing very well. Over the last year 108,000 Morgana trees were planted  in the Netherlands and more will be set up in the autumn," says Gerard Kievit of Veiling Zuid-Limburg. "We expect a small harvest of Morgana apples this year, which will mainly be used for tastings. Next year we expect to harvest half a million kilos and in two years a million." 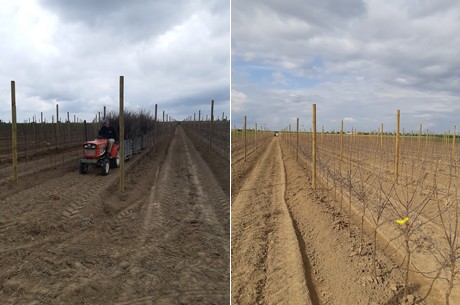 Export opportunities
Morgana is a hard apple that will be picked towards the end of September. According to Gerard the later picking time will have to be planned in the harvest and could be seen as a disadvantage, whilst David van de Graaf of Vogelaar Fruitcultures and Fruvo sees the timing as an advantage. "We start the season picking the Conference, followed by Xenia. It's an advantage that the picking date for Morgana doesn't overlap with the pear harvest. Morgana also has a very good shelf life due to the hardness of the apple. This makes the apple very suitable for transport to faraway countries, but also for storage, in order to offer the customer a fresh apple later on in the year."

"During the growth it is important that the apple gets enough light forcolouring. This is why we planted the trees in a hedgerow, with the intention of cutting mechanically. Only apples with sufficient colouring will be sold under the name Morgana. We won't be selling second class product," continues Gerard.

Sustainable cultivation
Because Morgana is a child of Golden the apple isn't easily susceptible to disease. There should be few problems with tree cancer and mildew and scurvy shouldn't be issues if they are maintained. "We are convinced that Morgana has very good characteristics for the grower and the cultivation speaks to us. Nowadays we have to grow fruit with increasingly less pesticides and the Morgana is perfectly suited for this," says David. 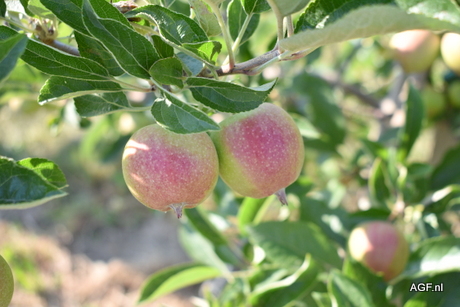 Planet Proof
A lot of varieties have come onto the market in recent years that are extremely sensitive to fruit tree cancer, including Kanzi, Magic Star and Braeburn. Junami was one a few newer varieties that is less susceptible, like Morgana. "We will certainly see these apples in the supermarket in the future, but the cultivation will become increasingly difficult. Retail shows increasing interest in Planet Proof, which means exceptions have been made with regards to using certain substances for certain varieties," according to David.

"Because Morgana is a club variety, we will be working with a Morgana team. The team consists of the Italian Melinda, Germany Krings, Belgian BFV and Veiling Zuid-Limburg. We will take the grower through the process. The apple will be carried by the growers, but sold in one place to maintain the region and and the value of the brands," concludes Gerard.