New research indicates that teens with unhealthy eating habits may be more likely to have depression. A high-sodium, low-potassium diet (such as one with a lot of fast-food and not much produce) was linked to more severe symptoms of depression. These results suggest eating more fruits, vegetables, and whole grains could help improve mental health. But more research is needed to address other diet and lifestyle factors.

For the study, published August 23 in the journal Physiological Reports, researchers looked at 76 middle-school students in urban Alabama. They compared self-reported depression symptoms with the teen's sodium and potassium levels, measured by a urine test, over the course of a year and a half.

The researchers found that teens with higher levels of sodium and lower levels of potassium were more likely to report frequent symptoms of depression, even after adjusting for other factors like age, baseline depression levels, and body mass index.

They also found that sodium seemed to have a cumulative effect on mood over time: Depressed teens with a high sodium intake weren't necessarily depressed at the beginning of the study. 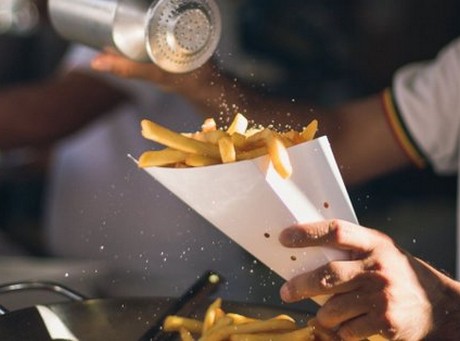 The findings suggest a diet high in salt and low in potassium could be harmful to mental health over time, and eating more fruits, vegetables and other whole foods might help mitigate depression symptoms.

Poor diet has long been associated with risks of mental health issues, according to the study's authors, although it's not clear how. But while previous research has relied on participants' self-reported eating habits, a method which has been found to be biased, this study more accurately assessed people's diets by comparing sodium and potassium levels in participants' urine.