After wreaking widespread destruction and killing at least seven people in the Bahamas, Hurricane Dorian has passed by Florida, causing only minimal physical damage. The storm has strengthened again into a Category 3 hurricane, and winds are in excess of 100 miles per hour near its core. However, the Hurricane was far enough away from the Florida coast to avoid causing any major problems for growers.

"We had some wind gusts and rainfall, with our grove near Vero Beach recording just over two inches," said Doug Feek of DLF International. "Another of our groves that we work in had three to three and a half inches. Wind gusts were 30 - 40 miles per hour in some spots."

DLF International grows citrus in the central Florida coast region, but Feek said there are no reports of any significant losses or damage to the trees. "We have been driving around checking the groves and we haven't seen too much damage. I'm sure there are some areas of isolated fruit damage or some minimal fruit loss here and there, but overall it was not eventful for us. I think we still have a full crop of fruit and it won't be any different than what it was before the storm."

Main disruption was logistical
While there may be minimal damage out in the fields, the heaviest impact for Florida's produce industry was the closure of multiple ports of entry, whether land, air or sea. Evacuations were issued for many coastal areas, which resulted in delays for truck freight. Notably, Miami International Airport remained open throughout.

However, Andres Ocampo of HLB Specialties, a supplier and importer of tropical fruit, said that some produce items were delayed. "Transportation was affected as the Port of Miami was closed," he explained. "Our containers that were due to arrive during the weekend were sitting on vessels stationed just outside of the port waiting for normal operations to resume. Loading was also affected on Monday as many trucking companies suspended services to South Florida. This resulted in some depletion of our inventory as we awaited for the containers to be unloaded from the boats."

He added though that things are gradually returning to normal. "The ports and airports resumed operations Tuesday afternoon so now it’s a matter of them working through the backlog." 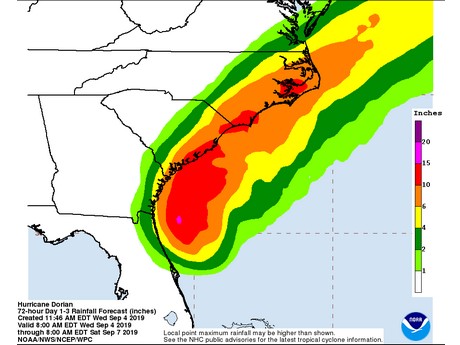 Carolinas now on watch
With the threat to Florida now over, South and North Carolina are bracing for the most severe impacts in the United States. For growers, rainfall will likely be the main concern, while the threat of wind is also present. Some agencies suggest that Hurricane Dorian could still make landfall in either of the Carolinas today or tomorrow. The storm is due to be off the South Carolina coast during Thursday before moving towards North Carolina through Friday. In both Georgia and South Carolina, areas directly next to the coast are succumbing to storm surges and there are tens of thousands without power.

Possible rainfall in some parts of South and North Carolina could exceed 10 inches, with more widespread areas expected to see at least six inches of rain. With corn and sweet potato harvest underway in North Carolina, growers will be watching closely for any adjustments in Dorian's path in the next 24 - 48 hours. It has been dry in the region, so some rainfall could be welcomed. However, as early as at the start of the week, growers were busy harvesting as much produce as possible, even working through Labor Day.

In an interview with North Carolina's Wake Weekly, Zacky Bissette of Zackly Rite Farms said his crews worked through the weekend to get ahead of the storm. “We have just been harvesting sweet potatoes as hard as we can,” Bissette said, adding that the rain may be beneficial for the sweet potato crop at this stage of the season. “We are trying to harvest all we can and try to beat the storm just like everybody else. As dry as we are, two or three inches of rain will help the sweet potatoes."