"Hardly any overlap between Spanish and Brazilian melon season"

"Partially due to the climate the melon production and supply in Spain has been different from previous years," says Frank Ocampo of Hagé International. "In some weeks there was an overproduction with a complete flooding of the market. Full trucks of watermelons at €20/0,25/kg were being offered on the market. There was lower quality in some weeks, the flesh of some melons in particular wasn't good enough for slicing and sometimes not even for retail. This was partially due to the aggressive weather in Murcia in particular. In northern Europe this translated into an unstable supply, in some weeks it was hard to sell trade and some weeks there wasn't a single box of some varieties left at the end of the day."

Small to no overlap between the seasons
"Thankfully, as Hagé we have reliable partners during both the overseas and Spanish season who can supply us at all times and despite the difficult Spanish season we were still able to serve our customers. We thank them for this and hope for better days in the future," says Frank. "In recent weeks Spain has fairly dried up with regards to certain varieties, this combined with the good temperature 'up North' and shortages in Spain meant that the melon on the free market could be sold reasonably to quite well. As of last week, Spain is now mostly finished and this leaves space for the overseas season in Brazil with a small to no overlap between both seasons. We will slowly move into our programmes with both Spanish and Brazilian melons for our retail and trade customers."

"A lot has been said and written about the expected volumes and prices in recent months. A lot, a little, water shortages, over production, sea freight; all factors that influence the price and volume in Europe. The fact remains, as in every season, that there are changes in players on both sides. New growers, new importers who take a chance without having a good collaboration agreement. I believe that only long term relationships and expertise in cultivation, but also marketing and defending the trade can lead to success," declared Frank, who is in charge of melons, as well as other products, within the group. 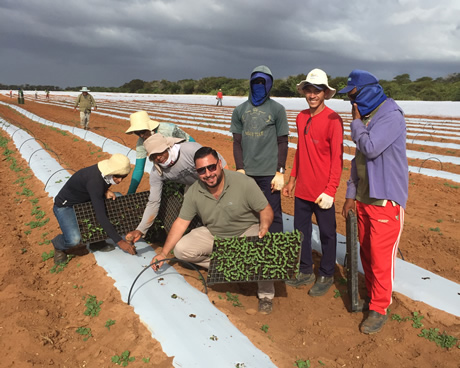 Frank planted one of the first Galia in Brazil in June, which arrived this week.

Call to all growers and fellow importers
"With all due respect to growers in Brazil and our fellow importers I want to ask the following with regards to the coming season: To the growers: only grow and export what you have sold with certainty, with a small surplus in a number of crucial weeks of the year. To our fellow importers: Only import what you can defend and sell. No one benefits from selling a 5kg box of Galia or Canteloupe for 2 Euro or selling them in free trade. The final consumer always pays a market conforming price. This market conforming price should always end up in the pockets of the growers, with a healthy margin for the importers. The consumers will then still pay a market conforming cost price throughout the season with fresher melons for an honest price as a result."

"How often does it happen that there are importers that don't even have one set sales programme, but then put 20 to 30 containers on the market without a sale or price guarantee, which pulls the prices down throughout the market? This has consequences, first of all for other imports and secondly the growers. We all have to waste less in the world. What is the point of importing all these socially sustainable melons if you have to sell them for dumping prices or in some sad cases even have to destroy them? Planting so many trees to then triple the CO2 emissions?" Frank muses. 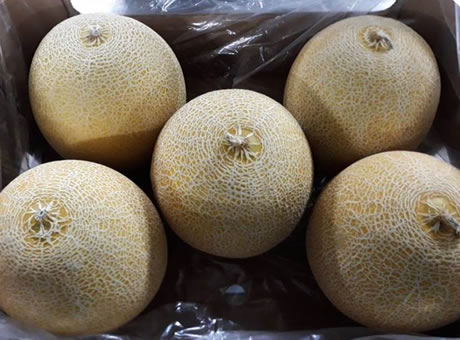 ... and the result of his efforts

"This overseas season we will focus on a stable and controlled import for both our retail programmes and our Trade in daily and weekly sales programmes. More intensive collaborations with our growers in Brazil and Central America and customers within and outside of Europe will also be crucial in making this season a success. Every overseas melon season is different and everyone says how it went for them. Suppliers, customers and the environment are our top priorities," according to Frank. "This week we received the first melons in Geel, Water, Galia, Cantaloupe Harper, Piel de Sapo and a few 'Waterballs' from our growers, who of course all have GlobalGap certification and on top of that are SMETA and Rainforest Alliance certified. All our melons have at least one social certification that complies with the IDH covenant with which we as the Greenery commit ourselves to our customers. "

"The quality can only be praised. Our customers are very satisfied with the first deliveries and we trust that this will continue to be the case in the coming weeks. Finally, I wish the best of luck to all parties that deal directly or indirectly with the melons and watermelon business and hope that it is a good overseas season for all of us, so that we can earn a fair living on it. This week was a double whammy for me and hopefully the market will remain good in the coming weeks, so that we can add an extra slice to it," Frank concludes, laughing.