As the Hass harvest nears an end in Central Queensland, peak industry body Avocados Australia says nationally it is still on track for a record production in the 12 months to June 2020.

"We usually experience supply volumes to drop in the first few months of the year, but in 2020 we are expecting 1.8 and 1.6 million trays will reach the market for January and February respectively, supplied mainly by Western Australia, New Zealand and North Queensland," he said. "In the following months from March to June 2020, we are expecting slightly lower volumes, averaging 1.6 million trays per month, equalling around 370 thousand trays weekly."

According to the Australian industry’s July 2019 quarterly report, volumes for the coming year are expected to be fairly consistent from month to month with very large volumes expected from August to December 2019. Total supply (including New Zealand imports) is expected to average 1.7 million trays per month, or more than 400,000 trays weekly.

Harvesting is underway in the Sunshine Coast, South Queensland, Tamborine/Northern Rivers, Central New South Wales, Tristate (parts of New South Wales, South Australia, Victoria and Tasmania), and close to wrapping up in Central Queensland. The Western Australian season has also started in some parts of that growing region, with premium fruit already on its way to Japan, as part of our second season in that market.

The North Queensland Shepard season ended lower than 2018 (down more than 15 per cent), and Hass production from the region was down a few percent from the previous year. 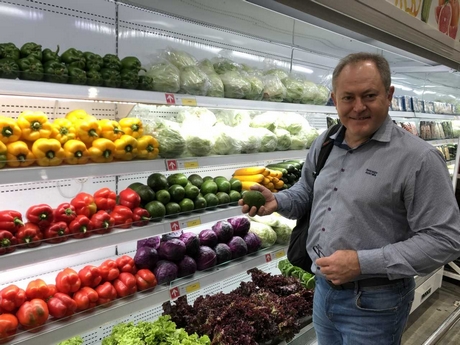 In July, Mr Tyas took part in a visit to India, as part of a Hort Innovation facilitated market visit, with a detailed program of meetings arranged by Austrade, to explore opportunities for the industry. He says the industry is keen to work with the Australian Government Department of Agriculture to negotiate market access as soon as possible.

"This market visit is providing Australian fruit industries with important in-country experiences," he said. "The Indian market has a lot of potential with a large population, and a high percentage of younger consumers looking for healthy options, including fresh fruit. Everyone we met with during the week in India confirmed that Australian avocados should have a very good opportunity in India. The opportunity is now."

Photo: Retail in India ranges from push carts to high end retail, with displays like this encouraging for the Australian industry's plans to export premium avocado.

The Australian industry is also keen to expand current markets, with promotions already held in Malaysia this year, under the Hort Innovation Taste Australia banner.

“These promotions are an important extension of the Australian avocado marketing program,” Mr Tyas says. “We need to grow our international markets to keep pace with our increasing domestic production. At the moment, Australia exports less than 5 per cent of our avocados, but as production increases, we will be in a position to offer additional supplies in markets such as Malaysia. At the moment, Malaysia is the destination for 43 per cent of our export avocados, followed by Singapore and Hong Kong.”