Hurricane Dorian spares Puerto Rico as it heads for Florida

Puerto Rico has escaped damage as Hurricane Dorian passed over the island in the early hours of Thursday morning. The feared strong winds and damaging rainfall did not eventuate, with only heavy rain in some parts recorded. Dorian has now moved north, with the latest path having it skirting around the Greater Antilles before heading west towards the Bahamas and the central Florida coast.

"We were quite frightened prior to Dorian hitting Puerto Rico," said Eileen Rodríguez Scheman of MS Mango. The company lost their entire papaya crop two years ago when Hurricane Maria hit the island. But this time around, the winds were not nearly as severe. "It really was not too bad," she said. "There was a lot of rain - in the order of two to four inches, which is not enough to cause concern. The forecast strong winds did not eventuate and that is good for our papaya crop, which is sensitive to wind.

As the name suggests, MS Mango does grow mangoes. However, the season has just finished, with the attention now on papayas and other crops like pumpkins, zucchini, and pickles. 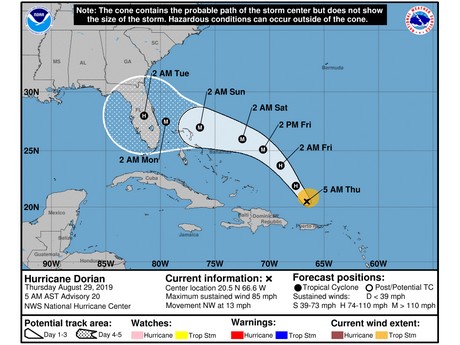 The projected path as of Thursday morning. A larger version of the image can be viewed here. Image: National Hurricane Center

Winds were to the north
Although Hurricane Dorian did pass near Puerto Rico, it did not pass directly over it. Moreover, the strong winds and rain were to the north side of the system, which producers say was the reason why there was no damage.

"It just passed us by, with all the strong winds to the north of the system and away from the island," said Raymond Marquez of Empacadora Hill Brothers. "We did have moderate rains, but not excessive by any means. All the damaging winds and rain were out to sea." He added that there is a lot of produce in season in Puerto Rico, but there are no reports of any damage.

Concern for Florida citrus
According to the National Hurricane Center, Hurricane Dorian is expected to strengthen into a Category 3 Hurricane as it approaches the Bahamas, followed by the Florida coastline, with the forecast indicating it will cross the coast on Labor Day Monday. In the US, the watch area extends from the Florida Keys all the way to Georgia.

Experts are preparing for the worst as current projections show that Dorian will be passing through significant citrus acreage.

“Certainly one has to be very nervous given the most recent path projection” for Dorian, said Ray Royce, executive director of the Highlands County Citrus Growers Association, in an interview with Bloomberg.

The Bloomberg piece went on to say that the state was showing potential for as many a 80 million boxes in 2019-20, according to Royce. Growers need every fruit they can get because prices paid per box will be lower this year, he said, as Florida’s farmers compete with Brazil’s bumper crop.