Exactly one year after its inauguration, on 16 July 2018 at Hood River Valley, in Oregon, U.S.A., the Unitec 18-lane line equipped with Pears Sort 3 technology has given life to a final product characterized by qualitative homogeneity within single supplies and between one supply and another which led the final consumers to significantly increase their purchase. 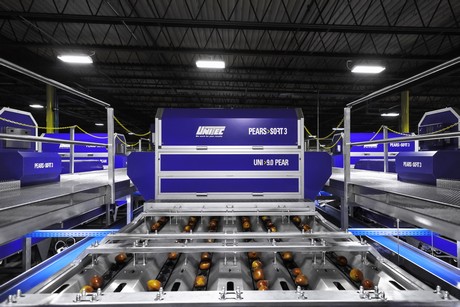 The clamor aroused by this pear season was intensified by the distrust towards pre-sorting lines, a very widespread feeling within the US fruit and vegetable sector. To date, in fact, the US Packing Houses handling pears have always preferred direct packaging lines, in the belief that pre-sorting lines lacked delicacy and therefore could damage the pears. They have favoured them at the cost of giving up the great advantage of pre-sorting lines, which, unlike the others, put the packer in a position to know exactly how much and what product they have to sell before packing it.

The Unitec 18-lane line equipped with Pears Sort 3 technology purchased by Diamond Fruit Growers is one of the first pear handling lines in the United States that has brought a real turnaround: now more and more packers are focusing their attention to pear handling lines designed with these peculiar characteristics.

Gentleness on pears is just one of the distinctive features of the Unitec line, which has contributed to the results achieved by Diamond. The reliability of the quality selection made possible by Pears Sort 3 system designed by Unisorting, a division of the Unitec group, contributed to create these results.

Pears Sort 3 system is equipped with  high resolution cameras allowing for the scanning the pear 360 degrees,

The technology it possible to divide fruits into product classes, each class having its own territorial or consumption destination.

Unitec took the responsibility of designing and manufacturing from scratch a line dedicated exclusively to pears. The results did not take long in coming and David Garcia also spoke of an almost 100% increase in production efficiency and a significant reduction in labor costs: "Our ability to process more bins in an hour increased. Prior with two lines we were able to run 70-75 bins per hour. With the new line we ran 100- 140 bins per hour. Previous years we had up to 75 employees per shift sorting. On the new line we had 12-15 sorters per shift."

Unitec has already been present in the United States for some time with two operating branches, one in Lodi in California and one in Wenatchee in the State of Washington, which allow them to be close to their overseas Customers.