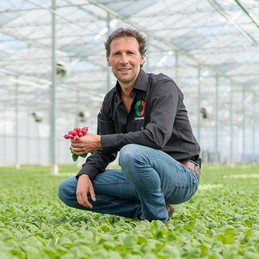 This summer's weather records have not made it easy for radish farmers. It has been a challenge in Dutch greenhouses. It has, however, been a significant problem for German and Polish full soil growers.

Workers sometimes even left; not wanting to work in the blistering sun. This, while the radishes themselves were scorched. The result?

“Here and there, there were shortages of radish bushels on the market," says Ad Coolbergen of the Dutch Ortolanda Oude-Tonge. He says by summer standards, sales were good this summer. This includes loose radish sales.

Experience shows that, as a rule, after the longest day of the year has passed, sales become more difficult for radish growers. The Scandinavian midsummer night's festivals are over. This event often causes a nice boost in sales. This year was different, says Ad.

“Sales were actually pretty good throughout the summer. Consumption remained stable, and the market was fairly constant. This stability was thanks to the good weather we had this summer. Sales have fallen a little in recent days. But with the current warm weather, this could just be a temporary dip," he says.

For Ad it is clear - the nice summer weather must stay. "The holidays are over, and things are back to normal. The more people are still having barbecues, the better for our sales."

"Things are a little difficult in the greenhouse at times. However, we do not have the problems they have with full soil cultivation. This is our advantage. You only see consumption dropping when the autumn weather really kicks in," Ad continues. 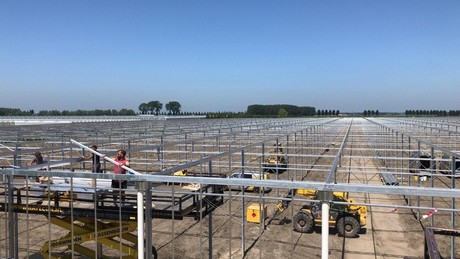 New greenhouse
By then, Ad expects the first seeds to be sown in Ortolanda's new greenhouse. This greenhouse is in Oude-Tonge, the Netherlands. During the summer, a greenhouse of 3,4 hectares was added to the current one. The existing greenhouse is more than 10 hectares in size. "We want to start sowing in the first weeks of October."

With this expansion, the company gains more acreage. Ortolanda Oude-Tonge will cultivate both loose radishes and radish bushels. This is important, especially for the cultivation, explains Ad.

“We are not a company that cultivates a lot of rounds. With these additional hectares, we do not have to use the same piece of ground. This means we spare the soil. If things go well, we can steam and disinfect the soil less too. There will, of course, be more product from our 14 hectares. This increased production does not equal the expansion, though."

Taking it easy on the soil
Ortolanda Oude-Tonge has expanded various times in the past too. "This means we can take it easier with our soil. At the same time, the phasing out of pesticides does, however, makes things more difficult for us, as radish farmers. For example, radish seed disinfection is prohibited. So, we do see more diseases occurring."

"This forces us to steam more regularly than we would like. This makes you see that decisions like these are quite drastic for your cultivation. They also influence your business operations. We have very little say about these kinds of decisions," Ad concludes.