A senior executive at a major food retailer has told the BBC it is considering introducing rationing. This would prevent firms that have not made their own no-deal Brexit plan from using food retailers as wholesalers. He did not envisage the limits to affect normal retail customers.

"One potential problem is that businesses who are struggling with their supply chains effectively use ours," he said. "We would need to limit the amount restaurants or convenience stores, for example, that are short of stock could buy," said the executive, who spoke to the BBC on condition of anonymity. "We wouldn't use the word rationing but that is effectively what it is. Limiting the volumes small businesses can purchase so that our retail customers get a chance to get what they need." 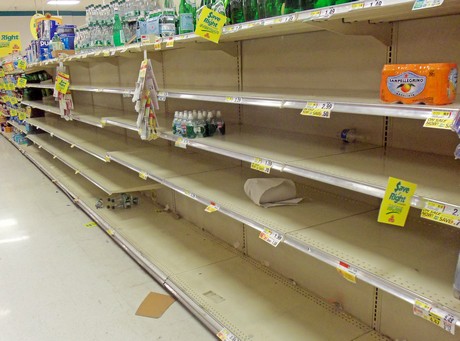 Avoiding empty shelves
Supermarkets already use rationing of sorts to limit the amount of items on special promotions people can buy. No-deal Brexit rationing would work in a similar way - with the limits advertised on the shelf labels and enforced at the checkout. Another boss, former Sainsbury's chief executive Justin King, agreed that some bigger retailers would effectively become wholesalers as it has happened before.

'Hard to pick worse date'
Food retailers say that a no-deal Brexit date of October 31st is much more challenging that the previous deadline of March 29th. Justin King said there were two reasons. "First, retailers have started accumulating stock for Christmas, which means warehouses are full of frozen, chilled and ambient goods. Second, the beginning of autumn sees the UK much more reliant on overseas fresh produce."

Recently leaked government no-deal preparation documents revealed that in a worst case scenario, flows of imports after three months could still be between 50-70% of current levels.