The Russian import of apples and pears decreased considerably after the ban was implemented in 2014. In the 2013/14 season, Russia imported 1.2 million tonnes of apples, while in the 2018/19 season it was just 0.8 million tonnes. In pears, it concerned 425,000 tonnes and 260,000 tonnes, respectively. The loss of the import of top fruit from countries including Belgium and the Netherlands is therefore not even close to being compensated by import from other countries. However, a lot of top fruit from Belgium and the Netherlands, among other countries, ended up on the Russian market via the Baltic countries and Belarus. This can also be seen in the official Lithuanian and Belarusian statistics. In 2018 it was less than in previous years, according to official statistics. Official figures don’t show that more top fruit is grown in Russia itself, although one can wonder how reliable these figures are. 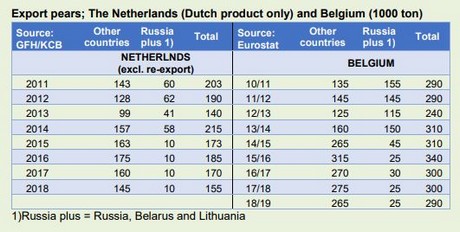 More pears from Southern Hemisphere
Regarding pears, more has been imported from South Africa and Chile (different season than EU) and China since the ban. The import from China might’ve been larger in 2018/19 than in 2013/14, but it was less than in the intervening years. More pears were imported from Turkey as well, although these volumes weren’t very high. 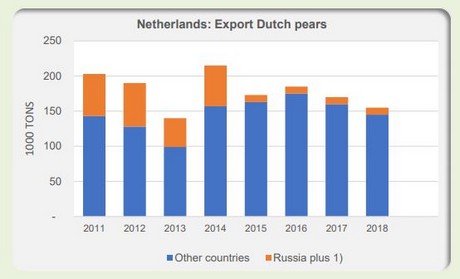 New sales markets pears: limited amounts for now
The pear export from the Netherlands consists of product grown in the Netherlands and re-export. The export of Dutch pears fluctuated between 150,000 and 200,000 tonnes in recent years. Including re-export, about 370,000 tonnes was exported in the 2018/19 season. That’s the same as in the previous two years. 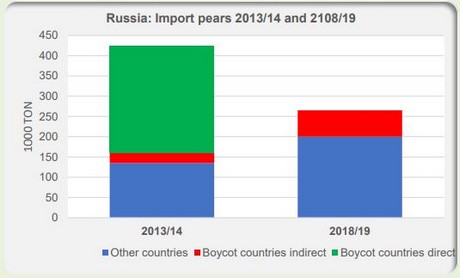 Belgian export of pears didn’t decrease after ban was implemented
The Russian market for Belgian pears was even more important than for the Dutch product. At its peak, this involved 140,000 tonnes. Estimations show that an amount of 70,000 tonnes was exported to Russia in the 2018/19 season. Figures from Eurostat show that the total Belgian pear export of past seasons wasn’t smaller than in the years before the ban. In the 2018/19 season it was slightly less than in the preceding season, but 290,000 tonnes is certainly no small amount. That the Belgian pear export is staying level cannot (yet?) be ascribed to export to markets further away. The size of that trade has been 5,000 to 6,000 tonnes for a few seasons now. Regarding traditional sales markets the increase in export to the UK and France is noticeable. In the past season, it was more than 40,000 tonnes for both countries, compared to less than 30,000 tonnes previously. The Netherlands, Spain and Germany are other important buyers. 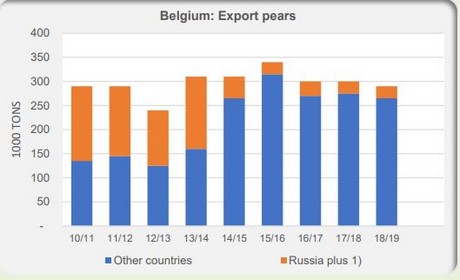 Polish apples still end up on Russian market
Regarding apples, Poland in particular had to settle for much less due to the Russian import ban. In 2013/14, 570,000 tonnes were imported by Russia. In 2012/13, it was 765,000 tonnes of Polish product. Italy, France and Belgium also supplied fair amounts. Few Dutch apples were sent to Russia in proportion. Despite the ban, quite a lot of Polish apples ended up on the Russian market in recent seasons. It’s estimated that it concerns 300,000 tonnes in 2018/19. In the previous season, a lot of Polish apples were sent to destinations further away as well. For example, 120,000 tonnes were exported to Egypt. Fair amounts were also supplied to Jordan, India and the Gulf states. Germany is good for 90,000 tonnes.

Eurostat registers the Dutch export including re-export (and semi transit). In the 2018/19 season, this was more than 235,000 tonnes. Germany is by far the most important buyer. Sales to new, further destinations is very modest in size, about 3,300 tonnes. The United Arab Emirates and India are the most important markets. 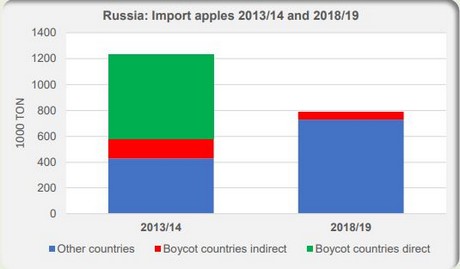