40 forklifts being used at the Polish Bonduelle site

The vegetable factory of Bonduelle in Gniewkowo in Poland has 40 forklifts from manufacturer Yale Europe Materials Handling in its vehicle park. Under a long-term lease, the vehicles will be provided by local Yale dealer Emtor. Yale says that around 30,000 tons of vegetables are processed in Gniewkowo every year, reports Logistik Heute. 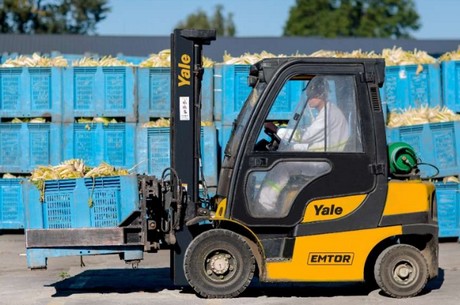 Bonduelle's vehicle park has been specially adapted to its environment. (Image: Yale)

Washing, blanching and freezing
The processing consisted of washing, blanching and freezing, which is why the vehicles had to be adapted to the operating environment. The working conditions therefore vary between a cooling environment of 0 to 4 degrees Celsius to special cold stores, where the temperature can drop to -18 degrees Celsius. To ensure that forklifts and drivers can work properly even under such conditions, the forklifts there have a closed cab with heatable double glazed panes, a double-layered insulation and thermostatically controlled heating.

Adaptation to narrow aisles
Furthermore, the aisles in the warehouse of the vegetable factory are extremely narrow. That means that adaptations had to be made for the forklifts to be able to drive there. Specially designed narrower forklifts required by the Polish Technical Inspectorate are now being used, according to Bonduelle Paweł Łyczywek Logistics and Supply Chain Director.

Seven days a week
In addition to this, the electric forklifts had to be adapted to a three-shift operation system, functioning seven days a week. A system for efficient battery removal was instituted, saving time and increasing the process safety. Since the most heavily used forklifts occasionally have to transport up to 15,000 tonnes of load per year, these vehicles are expected to have a shorter rental period of just three years instead of five. A dedicated mechanic and the availability of replacement forklifts are there to maximize the efficiency of the fleet, says Łyczywek.