Chilean kiwifruit prices and season's progress in Netherlands and China

In the Jiangnan (Guangzhou, China) and Rotterdam (Netherlands) markets, the Chilean kiwifruit season presents a high degree of progress, with prices being recorded for more than three months in the first and more than two months in the second. To date, the results are positive in both markets.

Netherlands
Looking back at the beginning of the Chilean kiwifruit season in the Netherlands (ranked in the fourth place of Chilean kiwifruit shipments in 2018), most doubts were about the price the fruit would get. Specifically, there were worries that the price would slump as low as the 2018 season, considering that the Italian kiwifruit stocks were in a considerable high level in march. At the same time, the news from Chile was that the total 2019 export would end with a lower export volume, but the worries were centered around the European market. However, the Chilean supply waited and started to arrive in the European market between one and two weeks later than it did in 2018, this allowed the market to clear some stocked volumes and push the price for local supply to even lower levels (data not shown).

The first prices for the Chilean supply were recorded on week 19, and although these prices were on a slightly lower level than the first prices recorded in 2018, as the weeks passed the demand increased and the market was more receptive. At the same time, the volumes from Chile were increasing, although not as violent as the previous year. This led to an average price for the Chilean kiwifruit supply of 1.5 EUR FOT/kg that remained in that level throughout the season. Currently, from June onwards, the average price has shown a rising trend despite the volume increase. Thus, the results at the end of the season might be positive. 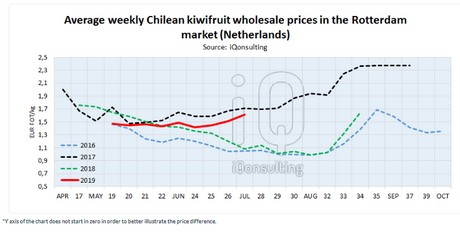 China
In the case of China, the market is conditioned by the low local production in the previous season due to the heavy frost that also affected the apples. In this case, the Chilean supply began its 2019 season in week 14 (first of April), at the same time as the previous year. The prices for the first three weeks of the season managed to remain at a high level, above 2.5 USD FOT/kg and then fell heavily below the 2 USD FOT/kg margin on week 19, after massive arrivals from Chile in the previous week. Despite the fact that the volume of Chilean kiwifruit arrived in China up until week 28 (July 14th) 35% higher than the same period in 2018 and 10% higher than 2017, the weekly average wholesale price has been higher than the two previous years in most of the weeks.

Better Quality
Finally, it must be pointed out that in both markets, the quality of the Chilean supply has been reported as better than last year, which is good news and reflects the measures taken by the Chilean kiwifruit committee.